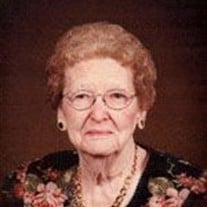 Marshall: Linda M. Stelter, age 93, of Marshall, passed away at her residence on Monday, May 10, 2010. Funeral services will be 2:00 P.M. Thursday, May 13th at Hope Lutheran Church in Minneota. Burial will be in the church cemetery. Visitation will be 4:00 P.M. to 8:00 P.M. with a 7:30 P.M. prayer service Wednesday at the Hamilton Funeral Home. Visitation will continue at the church on Thursday, one hour prior to the service. Linda Margaret was born July 9, 1916 to John and Marie (Hanson) Ostul on a farm in Nordland Township south of Minneota. She attended country school District 25 and graduated from the Minneota High School in 1934. Her mother passed away that same year and she remained at home on the farm with her father. In 1940 she was united in marriage to Sigurd Hanson and to this union two children were born, namely; Douglas and Marilyn. Sigurd passed away in 1970 and she moved to Marshall where she worked for the Sandy and Marcella Crow family. In 1989 she married Gerhardt Stelter. Gerhardt passed away in 2000. She later moved to assisted living residence at Patricia Court. Linda passed away at her residence on Monday, May 10, 2010. She had reached the age of 93 years, 10 months and 1 day. She is survived by her son, Douglas J. (and Lynette) Hanson of Willmar and daughter, Marilyn Sell of Marshall; grandchildren, Jennifer (Sell) Minett and Steve, Denise (Hanson) Knight, and Adam, John Hanson and Jennifer, and Sara (Hanson) Chapin and Patrick; great grandchildren, Trent & Paige Minett, Avery, Lauren, Ellery & Jordan Knight, Emma & Jack Hanson and Charlotte and Carolyn Chapin; also Gerhardt’s family, Joyce (Stelter) and Neil Erickson, Gayle & Lois Stelter, Jeaneen Stelter-Nelson and Darrel Nelson. She was preceded in death by her parents; husbands; Gerhardt’s daughter & husband, Gretchen & Gordon Erickson, and son, Norman (Butch) Stelter. Linda was a lifelong member of the Hope Lutheran Church.’ Blessed Be The Memory Of Linda M. Stelter

Marshall: Linda M. Stelter, age 93, of Marshall, passed away at her residence on Monday, May 10, 2010. Funeral services will be 2:00 P.M. Thursday, May 13th at Hope Lutheran Church in Minneota. Burial will be in the church cemetery. Visitation... View Obituary & Service Information

The family of Linda M. Stelter created this Life Tributes page to make it easy to share your memories.

Send flowers to the Stelter family.