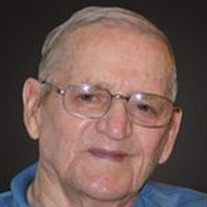 Marshall: Lloyd J. Johnson, age 92, of Marshall, passed away at the Avera Marshall Regional Medical Center on Friday, August 13, 2010. Funeral services will be 11:00 A.M. Friday, August 20th at the First Lutheran Church. Burial will be in the Marshall Cemetery. Visitation will be 4:00 P.M. to 8:00 P.M. with a 7:00 P.M. prayer service Thursday at the Hamilton Funeral Home. Visitation will continue at the church on Friday, one hour prior to the service. Lloyd was born to John M. and Ethel (Paul) Johnson on June 11, 1918 in Tyler, Minnesota. He was baptized and confirmed at the First English Lutheran Church in Tyler. Lloyd was a faithful member of the First Lutheran Church in Marshall. On September 4, 1938, Lloyd was united in marriage to Mera Luceil Petersen on September 4, 1938 at the First English parsonage. To this union of 71 years, they were blessed by five children, fourteen grandchildren and sixteen great grandchildren. They farmed near Lake Benton, Tyler and Marshall from 1941 to 1964. He worked in construction, drove milk truck and worked at the Marshall Public School as a custodian from 1968 to 1981. He then worked as a crossing guard from 1981 to 1995. Lloyd’s love was being with and doing things with his family, especially being a good caretaker for Mera Luceil. His other enjoyments included fishing, dairy cattle, wood crafting and helping Mera Luceil with her ceramics. He was a member of the Holiday Rambler Club. He and Mera Luceil enjoyed traveling in their motor home Lloyd passed away at the Avera Marshall Regional Medical Center on Friday, August 13, 2010. He had reached the age of 92 years, 2 months and 2 days. He is survived by his wife, Mera Luceil Marshall; five children, Gary (Evelyn) Johnson of Ortonville, Connie (Ed) Matthys of Durango, CO, Lonnie (Sharyn) Johnson of Waikoloa, HI, Kathy (John) Paxton of Marshall and Becky (Paul) Verly of Longmont, CO; fourteen grandchildren, Rick, Gayle, Dan, Tom, Tamara, Terry, Todd, Brad, Aron, Zach, Tabitha, Isaac, Chad and Scott; sixteen great grandchildren; a brother, Jack Johnson of Tyler; also many other relatives and friends. He was preceded in death by his parents; two sisters, Lois Hansen and Joyce Williams; and a great grandson, Lincoln Verly. Bless be the memory of Lloyd J. Johnson In Leu of flowers, memorials are preferred to the American Diabeties Association or the American Cancer Society. Online

Marshall: Lloyd J. Johnson, age 92, of Marshall, passed away at the Avera Marshall Regional Medical Center on Friday, August 13, 2010. Funeral services will be 11:00 A.M. Friday, August 20th at the First Lutheran Church. Burial will be in the... View Obituary & Service Information

The family of Lloyd John Johnson created this Life Tributes page to make it easy to share your memories.