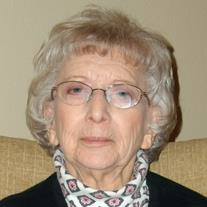 Lois Wathern, age 88, of Marshall, Minnesota, passed away on Sunday, October 28, 2018, at the Prairie Home Hospice Lockwood House in Marshall following a long battle with dementia. Funeral Services are 11:00 a.m. Friday, November 9, 2018, at Zion Evangelical Lutheran Church in Island Lake Township. Following a reception, interment will be in Trinity Lutheran Cemetery in Boyd, Minnesota. Visitation will be held from 5:00 – 8:00 p.m. Thursday, November 8, 2018, at the Hamilton Funeral Home in Marshall. A prayer service is scheduled for 7:00 p.m. Visitation will continue one hour prior to the service, from 10:00 – 11:00 a.m., on Friday at the church. Lois Mildred Amsden was born on November 7, 1929, in Milbank, South Dakota. She was the daughter of George and Hilda (Tulowetzke) Amsden. Lois was baptized as an infant and confirmed in her youth at Emanuel Lutheran Church in Milbank. She attended school in Milbank and then cared for her mother at home. Soon after, she met Mr. Marlow Skaalen and the two were married April 11, 1954, in Milbank. The couple made their home on the family farm near Boyd, Minnesota, while they raised their daughter, Monica. In addition to being a homemaker, Lois worked as a waitress in the Milbank, Ortonville, and Clarkfield areas. After 28 years of marriage, Marlow died in March of 1982 and Lois remained on the family farm. Six years later, Lois was united in marriage to William Wathern on July 23, 1988, at Trinity Lutheran Church in Boyd. They remained on the farm, adding 3 step-children to Lois’ life. Bill passed away in 2003. That same year, Lois moved to an apartment in Marshall and then about 5 years ago, Lois moved into Heritage Pointe where she enjoyed many good friendships. Lois was member of several Missouri Synod Lutheran Churches, serving in the Ladies’ Aide. She was, by nature, a very helpful person and found happiness in serving others. Lois was a musically gifted woman, a self-taught piano player who played by ear; she was often singing and dancing. She enjoyed polkas and was part of a band in her younger days. Lois was a member of a group that would go out and entertain at nursing homes and other care facilities. She also loved to bake and cook, always with a freezer full of cookies and bars. Most important to her was family. She loved being a mother, grandmother, and great-grandmother and had many memories of family trips. Lois Wathern went to her heavenly home on Sunday, October 28, 2018, just 10 days before her 89th birthday. Blessed be her memory. She is survived by her daughter, Monica (Charles) Lindemann of Marshall; 3 step-children, Gloria (Dave) Mittelstadt of Seattle, WA, Diane Clark of Seattle, WA, JoAnn (Gary) Domogalla of Alexandria; 3 grandchildren, Chad (Tosha) Lindemann of Milwaukee, Cerissa “Chrissy” (Ryan) Ling of Sioux Falls, SD, Callin Lindemann (Ashley Wedger) of Ghent; 4 step-grandchildren, Justin (Renae) Domogalla, Adam Domogalla, Karl Domogalla, Sarah Whipple, 8 great-grandchildren, Christian Ling, Caden Ling, Carsten Ling, Hannah Lindemann, Maria Domogalla, Madelyn Domogalla, Baliegh Domogalla, Abel Domogalla; sisters, Lucille (Robert) Todd of Rochester, Joan Sokolowski of Chisago City; brother, Virgil (Bev) Amsden of St. Paul; half-sister, Karen (Bob) Russman of Wilmot, South Dakota; nieces, nephew, other relatives, and friends. She is preceded in death by her parents; first husband, Marlow Skaalen; second husband, Bill Wathern; nieces, Barb Wittman, Michelle Amsden; and nephew, LuWayne Todd.

The family of Lois Mildred Wathern created this Life Tributes page to make it easy to share your memories.

Lois Wathern, age 88, of Marshall, Minnesota, passed away on...

Send flowers to the Wathern family.