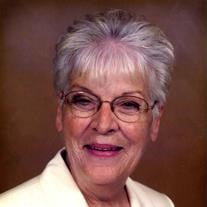 Loretta Ruth Schrunk was born on September 12, 1936, to Earl and Wilhelmina (Schippel) Schrunk, at 104 E. Emery (now Saratoga St.) in Marshall, Minnesota. She was baptized and confirmed at First Lutheran Church while growing up in Marshall and graduated with the Marshall High School class of 1954. She went on to switchboard school at the Minnesota School of Business in Minneapolis. On September 19, 1954, Loretta was united in marriage to Robert Bryan at First Lutheran Church in Marshall. The couple lived in various places in the Twin Cities and had 5 children: Steve, Cindy, Dennis, Sandy, and Chuck. Following a divorce in 1960, Loretta moved back to Marshall. She was married to Karmen Penske on July 23, 1966, at First Lutheran Church in Marshall. The couple made their home in Vesta and added 3 children to a blended family: Melissa, Perry, and Paul. Loretta’s work passion was as the Special Services Coordinator for Western Community Action in Marshall. From 1977 – 1983, Loretta worked at Belview Nursing Home before she completed her Home Health Aide Coursework in Granite Falls. She also did some community nursing care in Lyon county. She finished her working career as a customer service specialist for Tholen Auto Sales. All the while, she was a dedicated wife and loving mother to her 8 children. Loretta was an active member at First Lutheran Church in Marshall, St. John’s Evangelical Lutheran Church in Vesta, and past member of the Marshall VFW Auxiliary. Her enjoyments in life included long conversations on the phone, reading, crosswords, puzzles, playing Scrabble, and mapping her children’s travels in her State Farm road atlas. Loretta Ruth Penske entered her Heavenly home surrounded by her large, loving family on April 30, 2019. She reached the age of 82 years, 7 months, and 18 days. Blessed be her memory. Loretta is survived by her 7 children, Cindy & Ken Nash of Willmar, Dennis & Shari Penske of Ft. Myers, FL, Sandy & Christopher Hintz of Wabasha, Chuck & Shelly Penske of Norfolk, VA, Melissa & Chad Radel of New London, Perry & Gail Penske of Cottonwood, Paul & Heather Penske of Marshall; 29 grandchildren; 23 great-grandchildren; sister, Harriet Tholen of Marshall; nieces, nephews, other relatives and many friends. Preceding her in death were her parents, Earl and Wilhelmina Schrunk; husband, Karmen Penske; and son, Steven Penske.

Loretta Ruth Schrunk was born on September 12, 1936, to Earl and Wilhelmina (Schippel) Schrunk, at 104 E. Emery (now Saratoga St.) in Marshall, Minnesota. She was baptized and confirmed at First Lutheran Church while growing up in Marshall... View Obituary & Service Information

The family of Loretta Ruth Penske created this Life Tributes page to make it easy to share your memories.

Send flowers to the Penske family.