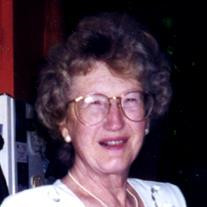 Services for Lorraine Lois Rensink, 89, of Marshall, are 4 p.m. Saturday at the Kingdom Hall of Jehovah’s Witnesses in Marshall. A luncheon will follow at the AmericInn in Marshall. She died Monday, May 15, 2017, at her home in Marshall. Lorraine was born Jan. 31, 1928, to Helmuth and Minnie Willert in Boyden, Iowa, the first of eight children. She was baptized Dec. 10, 1955, as one of Jehovah’s witnesses. She was united in marriage to Howard Rensink on Oct. 1, 1948, in Sheldon, Iowa. For most of their married life, they lived in Marshall where they raised their two sons, Randall and Joel. Lorraine was a homemaker and helped her husband with his business. She loved music and was an accomplished pianist. She enjoyed her coffee breaks at Hardee’s. She loved the evening starry nights and seeing the full moon and beautiful sunsets. She truly appreciated so many aspects of God’s creation. She was very hospitable and always had ham or turkey sandwiches for her guests. She was a kind, thoughtful woman who always put others’ needs ahead of her own. After spending time with her you always felt encouraged and uplifted. She had an infectious smile that would brighten everyone’s day. She was a good listener. She touched so many lives in so many ways. Lorraine was well known in the community as one of Jehovah’s Witnesses and will be missed by many people. Her loss will be greatly felt by her physical family, who kept in touch regularly by phone, but also by her spiritual family in the Marshall congregation of Jehovah’s Witnesses, who came to her aid during her sickness. They went above and beyond the call of duty, in bringing her meals, checking on her, taking her to doctors’ appointments and staying with her day and night so she could stay in her own home. They did this because of their great love for her. Lorraine was caring and compassionate, especially to those in need. Her life was devoted to the Christian ministry. She was happiest when she was talking to others about her beliefs, and she continued doing this until her strength gave out. Survivors include her son Joel (Sandy) of Bandon, Ore.; four sisters: Dorothy and June Willert of Osage, Iowa, Mari Willert of Trinidad, Colo., and Lenni (Ken) Dular of Des Moines, Iowa; brother, Larry Willert of Basalt, Colo.; four grandchildren: Karen Rainville, Winnemucca, Nev., Meredith Sagardi, Trinidad, Colo., Ryan Rensink, Farmington, N.M., and Morgan Thomas, Cheyenne, Wyo.; and seven great-grandchildren. She was preceded in death by her husband, Howard, son Randall, a grandson, Derek, a granddaughter, Teresa, and two sisters who died in infancy.

Services for Lorraine Lois Rensink, 89, of Marshall, are 4 p.m. Saturday at the Kingdom Hall of Jehovah&#8217;s Witnesses in Marshall. A luncheon will follow at the AmericInn in Marshall. She died Monday, May 15, 2017, at her home in Marshall.... View Obituary & Service Information

The family of Lorraine Lois Rensink created this Life Tributes page to make it easy to share your memories.

Send flowers to the Rensink family.