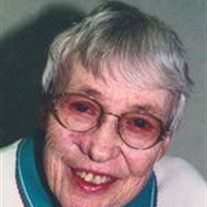 Louise Rankin, age 91, of Marshall, passed away Saturday, September 5, 2009 at Morningside Heights Health Care Center in Marshall. Funeral services will be 3:30 P.M. Thursday, September 10, 2009 at Christ Evangelical Lutheran Church in Marshall. Visitation will be held one hour prior to the service at the church. Burial will be in the Marshall Cemetery. Louise Alvina Roeker was born to Robert and Agusta (Galher) Roeker on September 4, 1918 in Waseca County, Minnesota. She was baptized on September 22, 1918. On June 4, 1933 Louise was confirmed and received first communion. She attended and graduated from country school district 88. She went on to nurses training in Minneapolis where she graduated in 1941. She worked in Minneapolis as a private duty nurse and also worked as a nurse at both Tracy and Marshall Hospitals. On December 31, 1945, Louise was united in marriage to George Rankin in Sioux Falls, South Dakota. George passed away on January 28, 1977. Louise continued her nursing career for 43 years before retiring on November 9, 1983. Her other enjoyments in life included flowers, gardening, fishing, quilting, making chow mein, baking and sharing strawberry pies, and spending time with family and friends. She is survived by friends, Joan and Don Palmer and family, and other relatives and friends. Louise was preceded in death by her parents; husband; brothers and sisters. Blessed be the memory of Louise Rankin.

The family of Louise Alvina Rankin created this Life Tributes page to make it easy to share your memories.

Send flowers to the Rankin family.