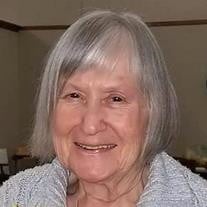 Lydia Hubler, age 85, of Marshall, Minnesota, died on Sunday, April 15, 2018, at Heritage Pointe Senior Living in Marshall, Minnesota. Funeral Services are 11:00 a.m. Friday, April 20, 2018 at Living Word Lutheran Church in Marshall. Following a reception, interment will be in the Hoiland Cemetery, rural Garvin. Visitation will be held one hour prior to the service on Friday, from 10:00 – 11:00 a.m., at the church. Lydia Irma Hermann was born on August 1, 1932 in Kybarty, Lithuania. She was one of 5 children born to Waldemar and Ida (Unterberger) Hermann. Lydia was baptized and confirmed in the Methodist faith. She and her family Lived in Lithuania, Poland, and Germany while avoiding Russian forces during World War II. They spent years as refugees carrying all their possessions and rarely staying in one place more than a year. In May of 1952, she emigrated from Germany with part of her family to Laramie, Wyoming, where she cooked for children in an orphanage. While reading cook books and interacting with other kids, Lydia taught herself the English language. After later moving to Syracuse, New York, she worked caring for children and keeping house while she went to school. Lydia finished high school there and raised her young family which included four children: Lori, Alan, Pam, and Carol. Lydia continued worked as a cook, cleaning houses, caring for people in their homes. She was trained as a CNA and worked at a nursing home in Syracuse. Her mother became ill and Lydia quit her job to care for her. She would later work at Crouse Hospital in Syracuse before her retirement in 1997. In 2006, after 53 years in Syracuse, Lydia moved into Windsong Apartments in Marshall, Minnesota, to be closer to her children. She volunteered at the Morningside Heights Care Center and was active with the Marshall Food Shelf and Esther’s Kitchen. When she needed more assistance with her daily care she moved into Heritage Pointe Senior Living in Marshall. Lydia was an ever-helpful person, always willing to drive others to appointments or lend a hand where she could. Her other enjoyments in life included gardening, reading, keeping up with current events, cooking and baking. She was a past member of Albright United Methodist Church and the Red Hat Society. Lydia Hubler was called home to heaven on April 15, 2018, in Marshall, Minnesota, at the age of 85 years, 8 months, and 14 days. Blessed be her memory. Lydia is survived by her 4 children, Lori Bruns of Marshall, Alan (and Jennifer) Hubler of Marshall, Pam Hubler of Syracuse, New York, Carol (and Duane) Wilking of Yankton, South Dakota; 11 grandchildren; 5 great-grandchildren; brother, George Hermann of Mexico, New York; nieces, nephews, other relatives and friends. She was preceded in death by her parents, Waldemar and Ida Hermann; sister, Edith Hermann; and 2 brothers, Heinz and Benjamin Hermann.

The family of Lydia Irma Hubler created this Life Tributes page to make it easy to share your memories.

Send flowers to the Hubler family.