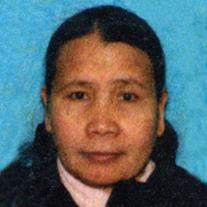 Ma Shwe Myint, age 50, of Marshall, Minnesota, died peacefully on Tuesday, September 17, 2019, at her home in Marshall, Minnesota. Funeral Services are 3:00 p.m. Friday, September 20, 2019, at First Baptist Church in Marshall, Minnesota. Interment will follow in the Marshall Cemetery. Visitation will be held one hour prior to the service, from 2:00 – 3:00 p.m., on Friday, at the church. Ma Shwe Myint was born in Hlaing Bweh, Burma, on in 1969, to Ton Gyi and Naw Pai. She fled as refugees to Thailand where she was married to Pah Nya. The couple had 2 sons while in Thailand. Following the death of Maung They Ha, in 2007 the family immigrated to the United States, starting in Houston, Texas. They made their way to Missouri, before settling in Marshall in 2015. Ma Shwe Myint worked at Tyson Foods and Turkey Valley Farms before her fight with cancer forced a retirement in 2018. In her spare time, Ma enjoyed fishing, cooking, hosting family and friends, and most of all time spent with her grandchildren. Ma Shwe Myint entered her Heavenly home on September 17, 2019. Blessed be her memory. She is survived by her husband, Pah Nya of Marshall; son, Maung Say (Paw Soe) of Marshall; grandchildren, Roger, Elizabeth, Abel; other relatives and many friends. Preceding her in death were her parents and a son, Maung They Ha.

The family of Ma Shwe Myint created this Life Tributes page to make it easy to share your memories.

Send flowers to the Myint family.