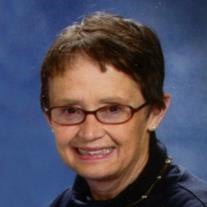 Margaret Ann Jones, age 64, of Marshall, Minnesota, passed away on Monday, June 6, 2016, at the Avera Marshall Regional Medical Center in Marshall. Memorial Services are 2:00 PM Thursday, June 9, 2016, at First Lutheran Church in Marshall. Interment will be in the Marshall Cemetery. Visitation will be one hour prior to the service, from 1:00 – 2:00 PM, on Thursday at the church. Clergy Officiating: Rev. Scott Fuller Congregational Hymns: For All The Saints / Just A Closer Walk With Thee / The Lord’s Prayer / Day By Day Margaret Ann Hagg was born on December 27, 1951, in Granite Falls, Minnesota. She was the daughter of Albert and Celesta (Stark) Hagg. Margaret grew up in Marshall, Minnesota, attending and graduated with the Marshall High School, class of 1969. She then moved to Sioux Falls, South Dakota, to work various places as an office administrator. In 1980, Margaret moved to Ft. Myers, Florida, where she worked at the Pink Shell Family Resort. She was united in marriage to Marlyn Jones in Ft. Myers in 1981. She loved the beach and enjoyed her time in Florida until 1987, when the couple moved to Custer, South Dakota, to work at a resort in the Black Hills. The couple shared 16 years of marriage before Marlyn died suddenly in 1997. Margaret then went to work in the accounting department at the Crazy Horse Memorial, which she loved. 2006 brought a move back to Marshall and she began her work as a paraprofessional in the Marshall Public Schools, where she was still employed. Margaret’s enjoyment in life included going to the beach, knitting, reading, and the children she cared for in the special education programs at school. Margaret Jones passed away after a short battle with cancer on Monday, June 6, 2016 at the age of 64 years, 5 months, and 10 days. Blessed be her memory. She is survived by her mother, Celesta Hagg of Marshall; nephews, Ab (and Cleo Ray) of Portland, OR, Cody (and Dana Gresko) Hagg of Philadelphia, PA, Tess (and Mike Gones) Hagg of Ozarks, MO; grandnephew, Henrik Gones of Ozark, MO; many aunts, uncles, cousins; and many friends in Custer and Marshall. Margaret is preceded in death by her father, Albert Hagg; husband, Marlyn Jones; and brother, Steven Hagg. In lieu of flowers, memorials are preferred to donor’s choice.

The family of Margaret Ann Jones created this Life Tributes page to make it easy to share your memories.

Send flowers to the Jones family.