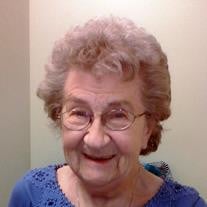 Margaret Verstraete, age 86, of Marshall, Minnesota, passed away on Saturday, May 13, 2017, at the Avera Morningside Heights Care Center in Marshall, Minnesota. Memorial Services are 11:00 a.m. Thursday, May 18, 2017, at Hamilton Funeral Home in Marshall. Visitation is one hour prior to the service, 10:00 to 11:00 a.m., at the funeral home. Officiating: Paul Beachem Special Music: Precious Lord, Take My Hand / Go Tell It On The Mountain / On Eagle’s Wings / Home (by Chris Tomlin) Margaret Mary Klysen was born on August 4, 1930, in Marshall, Minnesota. She was the daughter of Henry and Antoinette (Jansen) Klysen. Margaret was baptized, received her first communion, and was confirmed at Holy Redeemer Catholic Church in Marshall. She attended school at St. Joseph’s Academy and county school before graduating with the Marshall High School class of 1948. On Feb 26, 1949, Margaret and Gerart Verstraete eloped in St. Paul and stayed at the “Hook ‘Em Cow Hotel” near the St. Paul Stockyards for their honeymoon. It worked; the couple shared over 68 years of marriage and raised four children: Sharon, Patti, Gary, and Kathy. The family moved 11 times in 10 years before settling in Ghent in 1954. Margaret and Gerart lived there until 2013 when they joined the community at Hill Street Place in Marshall. Margaret was a devoted wife, mother, and grandmother. She was truly a selfless, caring, and giving person - the glue that held the family together, making each one feel loved and cherished, and leaving her entire family a legacy of faith. Margaret worked various jobs in Marshall throughout the years and she was proud to serve at the Avera Thrift Store, sponsored many children in need, and donated to St. Jude’s regularly. Besides spending time with family, her other enjoyments included coffee time with friends, crafts, sewing, baking, reading, and tending to her flower garden. Margaret Verstraete died on May 13, 2017, surrounded by her family in Marshall, Minnesota at the age of 86 years, 9 months and 9 days. Blessed be her memory. Margaret is survived by her husband, Gerart Verstraete of Marshall; children, Sharon (Ray) Root of Marshall, Patti Almich of Marshall, Gary (Renee) Verstraete of Marshall, Kathy (Tim) Blomme of Ghent; six grandchildren, Stacy (Jeff) Pagano of Excelsior, Robert (Hope) Shatto of Ghent, Ricky (Tanisha) Shatto of Marshall, Nicole (Sean) Borst of Marshall, Jeana (Nick) Ziegler of Maple Grove, Heather Blomme (Paul Rupp) of St. Paul; 11 great-grandchildren, Nick, Isabelle, Owen, Brianna, Caden, Mylie, Lilly, Brady, Noah, Gage, Emma; brother, John (Betty) Klysen of Montevideo; nephews, nieces, other relatives and friends. She was preceded in death by her parents, Henry and Antoinette Klysen; brother, Joe Klysen; and sister, Maryann VanDenBroecke.

The family of Margaret Mary Verstraete created this Life Tributes page to make it easy to share your memories.

Send flowers to the Verstraete family.