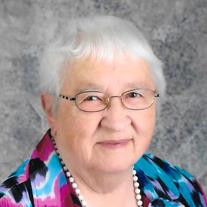 Margie Brosseau, age 90, of Chanhassen and formerly of Marshall, Minnesota, died on Wednesday, January 22, 2020, at her home at Olive Branch Estates Assisted Living in Chanhassen, Minnesota. Memorial Gathering of Family and Friends will be held from 1:00 – 3:00 p.m. Sunday, January 26, 2020, at the Hamilton Funeral Home in Marshall, Minnesota. Margie Lavonne Brosseau was born June 2, 1929, to Maurice and Edith (Busse) Castle in Clifton Township, Lyon County, Minnesota. She grew up on a farm near Milroy. She attended country school through 8th grade and then went to Marshall, graduating with the class of 1947. She got her 2-year teaching degree at Mankato State Teachers College and then taught 2 years in Sanborn, MN and then later she taught elementary school in Minneota. From 1964-68, she took off-campus classes to receive her math major, and started teaching Math at Marshall Middle School for the rest of her career, retiring from teaching in 1991. On August 21, 1951, Margie was united in marriage to Donald Brosseau in Marshall. The couple made their home on the family farm in 1954 and raised 6 children: Sandy, Debbie, Doug, Kathie, Diane, and Carol. Margie taught school while also helping Don on the farm for 60 years until they retired. Margie and Don then moved into their new home in Marshall. Don and Margie shared over 67 years of marriage together before his death a year ago. Margie’s enjoyments in life included family gatherings, collecting Gone With The Wind items, genealogy for family history albums and doing jigsaw puzzles. She and Don enjoyed traveling to many parts of the United States as well as New Zealand. Winters were spent in Hawaii and then later in Florida. She enjoyed the many cruises they took together. Margie is survived by her children, Sandy (Howie) Steenhoven of Marshall, MN; Debbie (Gordon) Cleveland of Custer, SD; Doug (Jeana) Brosseau of Albuquerque, NM; Kathie (Allan) Nelson of Chanhassen, MN; Diane Helmin (fiancé Les Weitzel) of Harris, MN; Carol Brosseau of Albuquerque, NM; 8 grandchildren; 16 great-grandchildren; 4 great-great-grandchildren; siblings, Marvin (Mavis) Castle and Marilyn Groff both of Marshall, MN; and many other relatives and friends. She was preceded in death by her parents, Maurice and Edith Castle; husband, Don Brosseau; grandson, David Petersen; and son-in-law, Chill Helmin. In lieu of flowers, the family is asking that memorials be sent to a charity of your choice. Thank you.

Margie Brosseau, age 90, of Chanhassen and formerly of Marshall, Minnesota, died on Wednesday, January 22, 2020, at her home at Olive Branch Estates Assisted Living in Chanhassen, Minnesota. Memorial Gathering of Family and Friends will be... View Obituary & Service Information

The family of Margie Lavonne Brosseau created this Life Tributes page to make it easy to share your memories.

Margie Brosseau, age 90, of Chanhassen and formerly of Marshall,...

Send flowers to the Brosseau family.