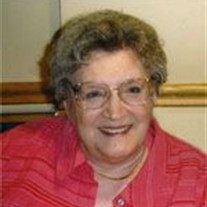 Marshall: Mrs. Marian A. Lindsay, age 76, of Marshall, passed away at the Avera Morningside Heights Care Center on Friday, August 6, 2010. Funeral services will be 2:00 P.M. Wednesday, August 11, 2010 at the Albright United Methodist Church. Burial will be in the Marshall Cemetery. Visitation will be 4:00 P.M. to 8:00 P.M. with a 7:00 P.M. prayer service Tuesday at the Hamilton Funeral Home. Visitation will continue at te church on Wednesday, one hour prior to the service. Condolences may be sent to www.hamiltonfh.com. Marian Anna was born to Edwin A. and Bertha (Weidauer) Drury on September 10, 1933 in Stanley Township, Lyon County, Minnesota. She was baptized and confirmed at the Marshall Methodist Church. She attended rural school near her parents farm and graduated from the Marshall High School in 1951. On May 15, 1952, Marian was united in marriage to Robert S. Lindsay at the Marshall Methodist Church. Marian worked as a telephone operator for a few years and was homemaker. For many years she was an official ice cream taster for Schwans. Her enjoyments included fishing and spending time with her family at Pocket Lake, gardening, playing cards, caring for her pet quail, Charlie, and bird watching. She also enjoyed having coffee with family and friends. Marian passed away at the Avera Morningside Heights Care Center on Friday, August 6, 2010. She had reached the age of 76 years, 10 months and 27 days. She is survived by her husband, Robert of Marshall; four sons, Doug of Marshall, Arlyn (Peggy) of Marshall, Kevin (Mary) of Richmond, KY and Craig (Connie) Lindsay of Marshall; four grandchildren, Angela Sharpe, Randi, Anthony and Jacob Lindsay; sister, Karen (Dennis) Rafson of Marshall; and brother, Ed (Rose) Drury of Marshall. She was preceded in death by her parents; brother, George Drury; and sister, Grace Drury. Marian was a faithful member of the Albright United Methodist Church at the time of her death. Blessed Be The Memory Of Marian Lindsay

The family of Marian Anna Lindsay created this Life Tributes page to make it easy to share your memories.

Send flowers to the Lindsay family.