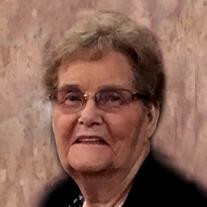 Marian Runia, age 86, of Marshall, Minnesota, died on Tuesday, March 13, 2018, at Avera Morningside Heights Care Center in Marshall. Funeral Services will be held at 10:00 a.m. Saturday, March 17, 2018, at First Baptist Church in Marshall. Following a reception, interment will be in the Ruthton City Cemetery. Visitation will be held from 4:30 – 7:00 p.m. Friday, March 16, 2018, at the Hamilton Funeral Home in Marshall. Visitation will continue one hour prior to the service, from 9:00 – 10:00 a.m., Saturday at the church. Clergy Officiating: Rev. Rob Heinz Organist: Judie Graffunder Congregational Hymns: Precious Lord, Take My Hand / How Great Thou Art / When We All Get to Heaven Special Music: Karen Goblirsch - It Is Well With My Soul Honorary Casket Bearers: Marian’s Granddaughters: Sara Larson, Alecia Frink, Rachel Cochran, Rosylnn Runia, Ashley Szymczak, Michala White, Erica Morman, Heidi Runia Active Casket Bearers: Marian’s Grandsons: Ryan Runia, Travis Runia, Matt Larson, Jeremy Cochran, Justin Szymczak, Kyle Frink Marian Jane Fischer was born on August 14, 1931, in Toronto, South Dakota. She was oldest daughter born to William and Mattie (Kruse) Fischer. She grew up on her family farm and attended country school through the 8th grade in Verdi, Minnesota. She then stayed home to help her folks on the farm and watch after her siblings. Marian was united in marriage to Robert “Bob” John Runia in Pipestone, MN, on November 9, 1951. She was a homemaker and farm wife as they began their life together by Russell and Tyler. In 1968 they moved to the family farm outside of Ruthton until they retired in 1990. They bought a home and moved it onto their son’s acreage outside of Marshall where they enjoyed spending their summers. In 1987, Bob and Marian started spending their winters in Yuma, AZ until 2015. They enjoyed spending time with friends and family. Their door was always open, and Marian always made sure she had plenty of coffee and dessert on hand for anyone that stopped by. Many times they would stay for dinner and end up playing ‘Tic’ or dominos which she was very competitive at playing. Marian was well known to be an excellent cook. She cooked for Bible camps during the summer for 20 years, managed a 4-H Stand at the County Fair for 6 years and worked in a Deli for 12 years while wintering in AZ. During this time, she began a catering business for family reunions, banquets and church functions. She also made and decorated many cakes for graduations, weddings and anniversaries. Friends and family were always asking for her recipes so in her 80’s, she published a cookbook, ‘Cooking With Love, From My Heart To Yours’. During her spare time, she enjoyed painting, baking, gardening, making woodworking crafts with Bob and spending time with family and friends. She loved having the grandkids visit and enjoyed teaching them how to bake and cook in the kitchen. She was devoted in taking care of Bob when he diagnosed with Alzheimer’s until it was no longer possible. She faithfully visited him while he resided in the nursing home and was at his bedside when he died in November 2016. They were married just 4 days shy of their 65th wedding anniversary. Marian is survived by her five children, Randall (Linda) Runia of Marshall, MN, Curtis (Lynn) Runia of Tucson, AZ, Arlen (Patricia) Runia of Appleton, MN, Diane Morman of Adrian, MI, Sherrie (Dan) White of Owatonna, MN; 11 grandchildren, Ryan (Heidi) Runia, Travis Runia, Sara (Matt) Larson, Alecia (Kyle) Frink, Rachel (Jeremy) Cochran, Roslynn Runia, Ashley (Justin) Szymczak, Michala White, Erica Morman, Sean (Crystal) Coughlin and Matt Coughlin; four great-grandchildren, Ronin Runia, Kamryn Runia, Liam Coughlin, Asher Coughlin; five siblings, Alvin (Marlene) Fischer of Hillsboro, OR, Jerry (Barb) Fischer of Forest Grove, OR, Larry (Nana) Fischer of Mililani, HI, Marlys Runia of Lebanon, OR, Sharon Haag of Pipestone; nieces, nephews, other relatives and friends. She was preceded in death by her husband, Bob Runia; son, Daniel; twin great-granddaughters; her parents, William and Mattie Fischer; two infant siblings; and a sister, Margaret Weinkauf.

The family of Marian Jane Runia created this Life Tributes page to make it easy to share your memories.