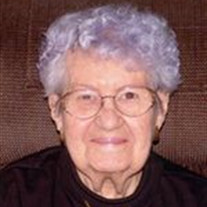 Marie J. Kor, age 92, of Marshall, passed away Thursday, November 13, 2008 at the Avera Morningside Health Care Center. Funeral services will be 10:30 A.M. Monday, November 17, 2008 at the Christ United Presbyterian Church. Burial will be in the Lynd City Cemetery. Visitation will be 4:00 P.M. to 8:00 P.M. with a 7:00 P.M. prayer service Sunday at the Hamilton Funeral Home. Visitation will continue at the church on Monday, one hour prior to the service. Condolences to www.hamiltonfh.com Marie Josephine Verlinde was born on August 11, 1916 on a farm near Tracy in Murray County, Minnesota to parents Camille and Marie (Putte) Verlinde. She was baptized and confirmed in the Christian faith. On November 13, 1937, Marie was united in marriage to Aiko Kor Jr. The lived near White, South Dakota and moved to a farm near Lynd and then to another farm on County Road 7 near Marshall and then to farm near Lynd. They retired and moved into Marshall. Aiko passed away on December 15, 1977. Marie passed away at the Avera Morningside Heights Care Center on Thursday, November 13, 2008. She had reached the age of 92 years 3months and 2 days. She is survived by her three children, Kathy Desmedt of Marshall, Dolly Dobrenski of Marshall and Madeline “Tommie” (Denny) Hinz of Tracy; nine grandchildren, Julie (Larry) Vlaminck, Joanne (Andy) Laufers, Mike Thompson, Lynn (Rich) Hansen, Deb Hoof, Barb Dale, Pat (Al) Stengel, Doug (Beth) Desmedt and Greg (Janet) Dobrenski; one step grandchild 18 great grandchildren; 3 step great grandchildren; 5 great great grandchildren; a sister, Yvonne Pihl of Marshall; also many other relatives and friends. She was preceded in death by her parents; husband Aiko; two infant grandchildren; sisters, Irene and Lorraine; brother, Firmin; and three son-in-laws, Cyriel Desmedt, Jack Dobrenski and John Thompson. Marie was a faithful member of Christ United Presbyterian Church where she served as a Deacon, Coordinator, Circle Secretary and Serving group chairman. She also was the Secretary for the Marshall Square Apartments. Marie’s enjoyments in life were her family, especially her grandchildren, gardening, crafts, baking (pies and bread), crocheting, playing Bingo and cards, nature lover of flowers, trees and birds, and a loyal Minnesota Twins fan. Blessed by the memory of Marie Kor.

The family of Marie Josephine Kor created this Life Tributes page to make it easy to share your memories.

Send flowers to the Josephine family.