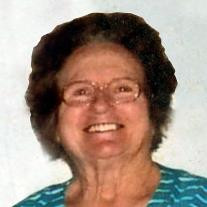 Marilyn June Gregg came into this world on May 6, 1931, in rural Balaton, Minnesota. She was the daughter of Theodore “Fred” and Amelia (Wood) Rokeh. She was baptized and confirmed at the Presbyterian Church in Russell. Marilyn attended school in Russell, graduating with the Russell High School class of 1949. On October 1, 1949, Marilyn was united in marriage to Roger Gregg at the Wayside Park in Marshall, Minnesota, and they raised three children: Susan, Danny, and Todd. The couple made their home in Marshall and then moved to a farm South of Marshall in 1972. The couple spent over 63 years of marriage together before Roger passed away on December 24, 2012. In addition to being a loving homemaker, Marilyn also worked for the Marshall Public Schools serving lunches starting in 1964. She was Head Cook at the Middle and High Schools and also served as pastry chef at Southwest Minnesota State University before her retirement in 1990. Marilyn truly enjoyed her time on the farm and was always up for a good conversation. Her other enjoyments in life included her family and grandchildren, going to craft shows, crocheting, embroidery, garage sales, singing in the Sweet Adeline’s Marshall Area Women’s group and the church choir. She was a devoted member of Christ United Presbyterian Church in Marshall where she served as a Deacon and with the United Presbyterian Women. Marilyn died on Friday, June 17, 2016, in Marshall, Minnesota at the age of 85 years, 1 months and 11 days. Blessed be her memory. Marilyn is survived by her three children, Susan (and Dennis) Marks of Shakopee, Danny (and Pam) Gregg of Prospect, TN, Todd Gregg (and special friend, Marilyn McNab) of Marshall; five grandchildren, Micah, Kata, and Simon Gregg of Tennessee, Nathan (and Becky) Marks of Rosemount, Shanna (and Jeff) Klein of Plymouth; four great-grandchildren, Miriam and Aaron Marks, Melia and Laila Klein; siblings, Verlyn (and Nolly) Rokeh of Winter Park, FL, Avis (Walter) Gravley of Marshall, Joann (and Ed) Sepanik of Ionia, MI; four sisters-in-laws, Doris (and Ed) Gruhot of El Cajon, CA, Marlys (and Harold) Carrow of Pipestone, Shirley (and Clint) Gregg of Marshall, Laurina (and Arlo) Gregg of Minneota, Marcella Rokeh of Ivanhoe; brother-in-law, Ron (and Joyce) Gregg of Minneota; nephews, nieces, other relatives and many friends. She was preceded in death by her parents, Fred and Ameila Rokeh; eleven siblings; and many in-laws. The family invites attendees to the church basement for refreshments following the service. In lieu of flowers, memorials are preferred to Christ United Presbyterian Church in Marshall. Thank you.

Marilyn June Gregg came into this world on May 6, 1931, in rural Balaton, Minnesota. She was the daughter of Theodore &#8220;Fred&#8221; and Amelia (Wood) Rokeh. She was baptized and confirmed at the Presbyterian Church in Russell. Marilyn... View Obituary & Service Information

The family of Marilyn June Gregg created this Life Tributes page to make it easy to share your memories.

Send flowers to the Gregg family.