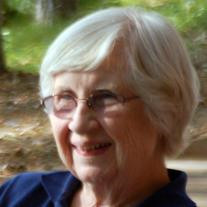 Marilyn Rogers, age 85, of Marshall, Minnesota, passed away on Sunday, March 27, 2016. Memorial Services will be 2:00 PM Saturday, April 30, 2016 at: Roseville Memorial Chapel 2245 North Hamline Ave Roseville, MN 55113 Interment will be in Ft. Snelling National Cemetery in Minneapolis, Minnesota. Marilyn Ruth Roberts was born December 4, 1930, in St. James, Minnesota. She was the daughter of John “Jack” and Ruth (Helweg) Roberts. She was baptized and confirmed at the Presbyterian Church in St. James. Marilyn grew up going to school in St. James and graduated from high school there. She furthered her education with a bachelor's degree from Macalester College and then earned her master’s degree in education from St. Thomas University in St. Paul. Marilyn met John Rogers while attending Macalester College. The two were united in marriage on June 8, 1952 in St. James. The couple made their home in St. Paul, Roseville and Arden Hills. After graduating, Marilyn taught Medical Technology and eventually became an administrator with the Medical Institute of Minnesota. After a successful career in the medical education field, she changed her focus, working as a compliance officer for a local bank, and volunteering with the United Way. A true educator, in her later years, she tutored and administered GED exams. Marilyn served as a Girl Scout Leader, volunteered with the Kiwanis Club, and held various roles in her church. She was a life-long learner, always taking another class to continue to learn and grow. She was a devoted grandmother, engaging her grandchildren with new experiences, games, puzzles and books. She took delight in becoming a great-grandmother. She loved reading, staying up on cultural events, and was a regular at the Guthrie and Minnesota Orchestra. Marilyn enjoyed traveling the world with her husband and daughters, as well as relaxing at the family lake cabin. Marilyn Rogers died on Easter Sunday, March 27, 2016, in Marshall, Minnesota at the age of 85 years, 3 months and 24 days. Blessed be her memory. Marilyn is survived by her three daughters, Jean (and Peter) Metcalf of Marshall, Joey Iversen (and fiancé, Ric Nichols) of Seattle, WA, Carol Rogers of Arlington, VA; 7 grandchildren, Brian (and Angela) Metcalf of Fridley, Susan Metcalf of Robinsdale, Drew Iversen of Des Moines, IA, Kelly Iversen of New York, NY, Becca (and Stephen) Ites of Des Moines, IA, Callan Rogers of Arlington, VA, Carson Rogers of Arlington, VA; great-granddaughter, Chloe Metcalf; brother-in-law, LeRoy “Pete” Peters of Placerville, CA; nieces, nephews, other relatives and many friends. Marilyn was preceded in death by her parents, Jack and Ruth Roberts; husband, John Rogers; and sister, Arlene Peters.

The family of Marilyn Ruth Rogers created this Life Tributes page to make it easy to share your memories.

Marilyn Rogers, age 85, of Marshall, Minnesota, passed away on...

Send flowers to the Rogers family.