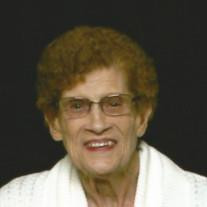 Loving mother, grandmother, sister, and friend, Marjorie Christianson, age 80, of Marshall, Minnesota, passed away on Monday, July 13, 2015 at Avera Morningside Heights Care Center in Marshall, Minnesota. Funeral Services are 1:00 PM Thursday, July 16, 2015 at Christ United Presbyterian Church in Marshall. Following a luncheon, interment will be in the Trinity Lutheran Cemetery, Balaton, Minnesota. Visitation will be held from Noon – 1:00 PM, one hour prior to the service on Thursday, at the church. Marjorie Elaine Peterson came into this world on October 29, 1934, in Cyrus, Minnesota. She was the younger of two girls born to Louis and Minnie Peterson. She was baptized and confirmed at Eden Reform Church in Herman, Minnesota. Marjorie attended and graduated with the Cyrus High School class of 1952. On October 21, 1952, Marjorie was united in marriage to the love of her life, Wilfred “Willie” Christianson in Morris, Minnesota, and they raised one daughter, Betty, and three sons, Wayne, Gary, and Glenn. The couple made their home in Starbuck, Balaton, and then Marshall in their later years. Marge was first and foremost, a devoted homemaker and loving wife. She also worked a number of years at Weiner Memorial Medical Center in the housekeeping department. Her greatest joys in life were her children and grandchildren. In the past few years, she had the thrill of meeting four great-grandchildren. She loved cooking, gardening, music and reading. She always had a smile, a hug, and an extra place at the table for family and friends. Family never got away without a lot of waiving and a joyful “toodaloo” from Marge. She truly loved life. Marjorie died on Monday, July 13, 2015, in Marshall, Minnesota at the age of 80 years, 8 months and 14 days. May she rest in peace and “toodaloo,” dear mother, until we meet again. Blessed be her memory. Marge is survived by her children, Glenn (and Joyce) Christianson of Marshall, MN, Betty Christianson of Marshall, MN, Gary (and Jeannie) Christianson of Alexandria, MN; grandchildren, Jessica (and Christopher) Kruk of Marshall, MN, Adrian (and Kendall) Hibl of Marshall, MN, Kody Evers (and Serena Olin) of Milroy, MN, Shelby Evers (and Derek Vosberg) of Milroy, MN, Christopher (and Kaia) Christianson of Moorhead, MN, Angela Christianson of Moorhead, MN, Amanda Christianson of Alexandria, MN; great-grandchildren, Addison and Emmett Hibl, Saige and Maiah Evers; nephews, nieces, other relatives and many friends. She was preceded in death by her parents, Louis and Minnie Peterson; husband, Wilfred Christianson; son, Wayne Christianson; and sister, Gloria Johnshay. The family invites attendees to the church basement for refreshments following the service.

The family of Marjorie Elaine Christianson created this Life Tributes page to make it easy to share your memories.

Send flowers to the Christianson family.