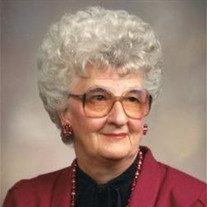 Marjorie M. Friend was born Dec. 4, 1915, in Cottonwood to Charles and Minnie Miller. She was baptized at and a member of Wesley United Methodist Church in Marshall. Early in her life the family moved from Marshall to Larimore, N.D. When Marjorie was 14 years old the family moved back to Marshall where she attended public school, graduating in 1933. After graduation, Marjorie was employed at Stones for 10 years and J.C. Penney Co. for 34 years, retiring in 1966. On Jan. 28, 1935, she was united in marriage to Lyle Friend. They had one son, Gary (and Becky) from Coon Rapids. Marjorie was an active member in the Wesley Church serving on many commissions: Primary superintendent for 15 years, director of the Daily Vacation Bible School, music committee, officer of the P.M. Forum, building committee for both new additions and coordinator for the Sunday morning worship service at a local nursing home. Marjorie was also a member of the Hospital Auxiliary, Lyon County Senior Housing and a Representative for Wesley Church Auxiliary at Fairmont Health Care Center. For several years during the months of January, February and March, she served as a hostess at the Trojan Seed Co. Research Farm on the island of Maui. She assisted her husband, Lyle, who was the company's consultant. Marjorie had many talents: seamstress, artist, cook and a master at creating numerous crafts for church bazaars. Her foremost enjoyment was her family - grandchildren, great-grandchildren and then great-great-grandchildren, smothering them with love and care. Survivors include her son Gary (and Becky); grandchildren Jill (and Troy) Blackburn, Shannon (and Pat) Nathe, Kelly (and Brian) Funfar, Matt (and Sarah) Friend, 10 great-grandchildren, nine great-great grandchildren; and sister Marion Burell of San Diego, Calif. She was preceded in death by her beloved husband, Lyle; five sisters and two brothers. Blessed be her memory.

Marjorie M. Friend was born Dec. 4, 1915, in Cottonwood to Charles and Minnie Miller. She was baptized at and a member of Wesley United Methodist Church in Marshall. Early in her life the family moved from Marshall to Larimore, N.D. When Marjorie... View Obituary & Service Information

The family of Marjorie Friend created this Life Tributes page to make it easy to share your memories.

Send flowers to the Friend family.