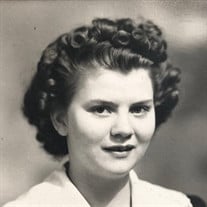 Marjorie Lang, age 93, of Lake Crystal and formerly of Russell, Minnesota, died on Tuesday, October 9, 2018, at the Hillcrest Rehabilitation Center in Mankato, Minnesota. Memorial Services are 2:00 p.m. Wednesday, October 17, 2018, at the Hamilton Funeral Home in Marshall. Interment will follow in the Zion Evangelical Lutheran Cemetery in Island Lake Township. Visitation will be held one hour prior to the services, from 1:00 – 2:00 p.m. on Wednesday at the Hamilton Funeral Home. Marjorie Alfreda Lang was born on March 21, 1925, near Minneota, in Lyon County, Minnesota. She was the only child of George and Louise (Stelter) Bengtson. She attended country school near Tyler, Minnesota, and then met and married Virgil Lang in Tyler on August 28, 1946. Marjorie and Virgil settled on a farm 2 miles Southeast of Russell and had 6 children. They were involved in the Minnesota Farmers Union along with local and state duties in the political field. After Virgil’s death in June of 2000, Marjorie moved out to Sturgis, South Dakota, to be near her son, Virlane. She then moved back to Lake Crystal to be near her other children. Marjorie was a brave, strong, and courageous woman; never afraid to roll up her sleeves and help those in need or get something done on the farm. Marjorie’s enjoyments in life included singing in the church choir, playing Hawaiian Steel Guitar, or tending to her enormous garden. Anyone in need of fresh vegetables or meat could always find it at the Lang’s. She will be remembered fondly and lovingly as she enters her new home. Marjorie Lang died on Tuesday, October 9, 2018, at the age of 93 years, 6 months, and 19 days. Blessed be her memory. She is survived by her 3 children, Kathleen Einan of Mankato, Milton Lang of Lake Crystal, Dean (and Georgia) Lang of Gillette, WY; 10 grandchildren; 18 great-grandchildren; 2 great-great-grandchildren; nieces, nephews, other relatives and friends. Marjorie was preceded in death by her parents; husband, Virgil Lang; sons, Maynard Lang, Virlane Lang, and Donald Lang.

The family of Marjorie Alfreda Lang created this Life Tributes page to make it easy to share your memories.

Marjorie Lang, age 93, of Lake Crystal and formerly of Russell,...