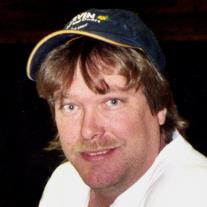 Mark Driessen, of Marshall, Minnesota, died at home with family by his side on Sunday, October 7, 2018. Memorial Services will be 10:30 a.m. Friday, October 12, 2018, at Hamilton Funeral Home in Marshall, Minnesota. Attendees are invited to stay for a reception following. Visitation will be held one hour prior to the service, from 9:30 – 10:30 a.m. on Friday, at the Hamilton Funeral Home. Interment will be in the St. Eloi Catholic Cemetery in Ghent, Minnesota. Mark Ronald Driessen was born on February 2, 1965, in Marshall, Minnesota. He was the son of Ronald and Patricia (Johnson) Driessen. Mark was baptized, received First Communion, and was confirmed at Holy Redeemer Catholic Church in Marshall. He attended school in Marshall, Milroy, Cottonwood, and Burnsville, before graduating from Marshall High School with the class of 1983. He went on to work for the County and for Western Community Action. On October 9, 1993, Mark was married to Lisa Benson at the Bell Chapel in Little Rock, Arkansas. They were 2 days shy of their 25th anniversary. Mark and Lisa lived on the family farm outside Marshall and raised 4 children: Nathan, Christopher, Tiffany, and Kayla. Mark did a little farming in his younger days, but most recently was working construction, largely with his father, Ronnie. Mark was a member of the Sons of the American Legion. His enjoyments in life included listening to '80s music, racing his '71 Chevelle, time spent with his father, the Vikings, tractors, trains, and most of all, his grandchildren. He will be dearly missed. Mark died on Sunday, October 7, 2018, in Marshall, Minnesota, at the age of 53 years, 9 months, and 5 days. Mark is survived by his wife, Lisa Driessen of Marshall; 4 children, Nathan Thweatt of Marshall, Christopher Thweatt of Vancouver, WA, Tiffany (and Nathan) Fassler of Brookings, SD, Kayla Driessen (and Brian “Buddy” Pehrson) of Russell; 3 grandchildren, Teagan Fassler, Landon Pehrson, Nolan Fassler; mother, Pat Driessen of Marshall; nephews, nieces, other relatives and friends. He was preceded in death by his grandparents; father, Ronald Driessen; and sister, Jill Houseman.

The family of Mark Ronald Driessen created this Life Tributes page to make it easy to share your memories.

Mark Driessen, of Marshall, Minnesota, died at home with family...

Send flowers to the Driessen family.