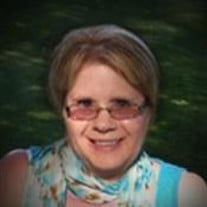 Marshall : Marlene A. Weets Johnson, age 54, of Marshall , passed away at Avera Marshall Regional Medical Center on Thursday, July 19, 2012 from anaplastic thyroid cancer (ATC). Celebration of Marlene’s life will be held at 10:00 A.M. Tuesday, July 24th at the Hamilton Funeral Home. Visitation will be 6:00 P.M. to 8:00 P.M. Monday and will continue at the funeral home on Tuesday, one hour prior to the service. Marlene Ann was born on February 4, 1958 in Spirit Lake, Iowa to Henry and Alice (Dather) Weets. During her childhood she lived in several towns in Iowa and Minnesota. She graduated from Tyler High School in 1976 and went on to attend Pipestone Vocational Technical School . On September 21, 1983, Marlene was united in marriage to Robert Johnson in Las Vegas, Nevada. To this union two daughters were born: Heather and Marissa. They made their home in Marshall . During her life, Marlene was employed at various jobs which included dispatcher for Pipestone Police Department, night auditor at Marshall Best Western, Marshall Corn Plant, Schwans Call Center and was currently employed at Customer Elation Call Center in Marshall. The love of Marlene’s life was spending time with her family. She also enjoyed reading, visiting and having coffee with her friends and going to the YMCA. Marlene was diagnosed with thyroid cancer (ATC) on May 2, 2012 and passed away on Thursday, July 19, 2012. She had reached the age of 54 years, 4 months and 15 days. She is survived by her husband, Robert of Marshall; two daughters, Heather (Michael) Kruk of Lubbock, TX, and Marissa Johnson of Marshall; two grandchildren, Gavin and Lilah Kruk of Lubbock, TX; her mother, Alice Weets of Russell; seven siblings, Henry Weets of Willmar, Jerry Weets of Balaton, Gary Weets of Holland, Pam (Ron) Schwarz of Tyler, Lori (Gary) VanOverbeke of Marshall, Daniel “John” Weets of Marshall, and Darin (Jami) Weeks of Clark, SD; and special friend, Pat Knoben; also many nieces, nephews and friends. Marlene was preceded in death by her father, Henry; sister, Marilee Hook; brother-in-law, Dennis Hook and paternal and maternal grandparents. Blessed be the memory of Marlene Ann Weets.

The family of Marlene Ann Weets created this Life Tributes page to make it easy to share your memories.

Send flowers to the Weets family.