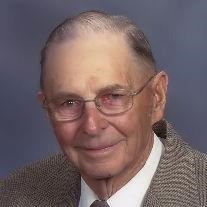 Marlyn Hefti, age 91, of Marshall, passed away Wednesday, January 27, 2016 at the Minneota Manor Care Center. Funeral Services are 11:00 AM Monday, February 1, 2016 at Christ United Presbyterian Church in Marshall. Following a reception, interment will be in the Russell Cemetery. Visitation will be held from 4:00 – 8:00 PM Sunday, January 31, 2016, at the Hamilton Funeral Home in Marshall. A prayer service is scheduled for 7:00 PM. Visitation will continue one hour prior to the service, from 10:00 – 11:00 AM, Monday at the church. Clergy Officiating: Rev. Anne Veldhuisen Organist: Margaret Greig Congregational Hymns: “Amazing Grace” “The Old Rugged Cross” Casket Bearers: Kyle Anderson, Cary Anderson, Brent Johnson, Greg Goodmund, Rod Vander Ziel, Gene Rasumssen Marlyn Hefti was born May 8, 1924 on the family farm near Lynd, Minnesota. He was the son of Clarence and Carrie (Goodmund) Hefti. Marlyn attended country school in District #2 and then graduated with the Lynd High School class of 1942. Marlyn went on to help his parents on the farm before serving his country in the United States Army. He served in Japan during the Korean War. He received his honorable discharge in September of 1951 and returned home. On September 21, 1952, Marlyn was united in marriage to Barbara Henrichs. The couple spent 33 years together and had two children: Richard and Diane. They made their home on the family farm where Marlyn farmed in his spare time, spanning over 40 years. He worked for McLaughlin & Schultz for 20 years as an equipment operator and another 18 years spent driving for MNDOT. Barbara passed away in June of 1985. Shortly after, Marlyn retired on April 1, 1986. Marlyn was a faithful life-long member of Christ United Presbyterian Church in Marshall. He was a life-long member of the VFW and Marshall American Legion member for over 40 years. Marlyn was a jokester who enjoyed his work and time spent with family. His grandchildren and great-grandchildren were a constant source of pride and joy. Ever a fan of International Harvester Tractors, he often said, “If it ain't red, leave it in the shed!” Marlyn Hefti died on Wednesday, January 27, 2016, in Minneota, Minnesota at the age of 91 years, 8 months and 19 days. Blessed be his memory. God blessed Marlyn with his children, Richard (and Annette) Hefti of Marysville, WA, Diane (and Scott) Evans of Marshall; four grandchildren, Augusta (and Jake) Thrift of St. Louis Park, Vanessa Hefti of Monterey, CA, Shawn (and fiancé, Tasha Krahenbuhl) of Kenyon, Justin (and fiancé, Rebecca Sik) of Russell; two great-grandchildren, Grace and Ava Evans; siblings, Dorothy Bengtson of St. Joseph, Audrey Rasmussen of Russell; nephews, nieces, other relatives and friends. He was preceded in death by his parents, Clarence and Carrie Hefti; wife, Barbara Hefti; and brother, Roy Hefti. The family invites attendees to the church basement for a luncheon following the funeral service.

The family of Marlyn Hefti created this Life Tributes page to make it easy to share your memories.