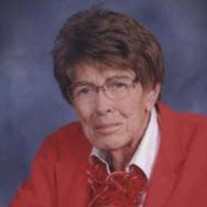 Marlys Irene Lund March 14, 1929 – September 14, 2014 Loved as an accomplished conversationalist with a cup of coffee and cookie always within arm’s reach, Marlys Irene Lund died on Sunday night, September 14, 2014 at the age of 85 years at Minneota Manor in Minneota, Minnesota where she had resided for just twenty-six days. She will be missed by her loving family and countless friends, and by all with whom she shared stories and a treat from her kitchen. A funeral worship service will be held for Marlys on Thursday, September 18, 2014 at 11:00 AM at Christ Lutheran Church in Cottonwood, Minnesota. Visitation will take place at Hamilton Funeral Home in Marshall, Minnesota on Wednesday, September 17, 2014 from 4-8 PM, and will continue at Christ Lutheran Church one hour before the worship service on Thursday. Marlys Irene was born on March 14, 1929 in Lyons Township, Lyon County, Minnesota to Ingvald and Florence (Larson) Lee, a bright spot in that year that the stock market crashed. She was baptized and confirmed in the Lutheran faith. She attended rural school a mile from home at District 93 until grade eight and then graduated from Russell High School in 1947. A fond memory from country school was when students brought potatoes to bake on the furnace in the school basement. She said that a potato never tasted so good! Marlys always dreamed of being a teacher, but she was needed to help care for her grandparents who were living with her family, and to do other chores around the farm. She helped her dad shock grain, and chatted with everyone that came to visit. For fun, she went to Marshall to start accordion lessons on an instrument borrowed from the neighbor, and in time, fell in love with her teacher, Arvid. On July 4, 1954 Marlys was united in marriage to Arvid C. Lund at Grace Lutheran Church in Russell, Minnesota. Three daughters were born to the couple: Cheryl, Susan, and Karen. The family farmed east of Cottonwood until retiring in 1987. In 1991, Arvid and Marlys moved to West Prairie Apartments in Cottonwood. Due to health challenges, Marlys moved to Minneota Manor on August 20, 2014. Marlys found joy in her hobbies of cooking and baking, knitting and crocheting, Hardanger needlework, decorating cakes, genealogy, taking care of animals, sewing matching dresses for her daughters and nieces, quilting, scrapbooking, and gardening. She was always eager to investigate a new grocery store. Anything could wait, however, if there was an opportunity to share a cup of coffee over conversation. Marlys was always curious to hear about what was happening in the life of whomever she was talking to, and also wanted to know all about the family of that same person! She loved to be a part of Neighborhood Club, Legion Auxiliary, and Sons of Norway. She provided thousands of cookies and hundreds of loaves of breads for the bank’s annual Christmas open house, and worked for many years cleaning some business buildings in town, and helping in the kitchen at school. Marlys liked to care for people. Her persistent attitude was to believe that all things were possible. In the midst of it all, Marlys cherished her family and always made herself available with her time and presence. Her grandchildren were precious to her and she was their head cheerleader in whatever endeavors they were involved. Marlys was an active and faithful member of Christ Lutheran Church in Cottonwood, and found delight in serving with great hospitality, singing in the choir, participating in the women’s circles and W-ELCA, serving on the Board of Deacons, Sunday School, and overseeing much work in the kitchen. Left to cherish memories and stories, and the yellow flowers in the back window of her car, are daughters, Susan (and Rick) Foster of Sioux Falls, SD and their daughter, Amy Foster; and Karen (and Dean) Berg of Cottonwood and their sons, Kyle Berg and Christopher Berg. Marlys will also be greatly missed by grandpuppy, Sydney; and her other relatives and dear friends. She was preceded in death by her parents; her husband, Arvid; her daughter, Cheryl; and her sister, Elaine Buchert. Blessed be the memory of Marlys Irene Lund. Remember, the coffee’s always on!

The family of Marlys Irene Lund created this Life Tributes page to make it easy to share your memories.

Send flowers to the Lund family.