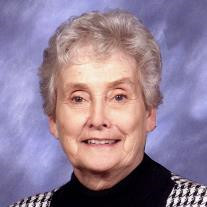 Marlys Reimler, age 86, of Marshall, Minnesota, passed away on Sunday, December 9, 2018 at Avera Morning Side Heights Care Center in Marshall. Memorial Services are 11:00 a.m. Saturday, December 15, 2018, at First Lutheran Church in Marshall. Interment will be at a later date in St. John Cemetery, Owatonna, Minnesota. Visitation will be held one hour prior to the service, from 10:00 – 11:00 a.m., on Saturday at the church. Marlys Mae Robson was born on April 22, 1932, in Minneapolis, Minnesota. She was one of three girls born to Lester and Gertrude (Nunn) Robson. Marlys was baptized and confirmed in the Lutheran church and attended school in Heron Lake, Minnesota. After her family moved to Sioux Falls, South Dakota, she finished at Washington High School there, graduating with the class of 1950. She continued her education at Hamline University, graduating in 1954. Marlys went on to teach 1st Grade and Kindergarten in Marshall. It was during her early employment that she met a fellow teacher named Robert Reimler. On June 8, 1957, Marlys and Bob were united in marriage at First Lutheran Church in Sioux Falls. The couple made their home in Marshall and Marlys was a devoted wife and mother to their three sons. She also worked part time substitute teaching when possible. The couple moved into Boulder Estates in 2012 and Marlys had recently been receiving care at Morningside Heights Care Center in Marshall. Marlys was an active church member at First Lutheran Church in Marshall. Like days past at Hamline, Marlys sang in the church choir and was active in many church circles, including quilting. She was passionate about P.E.O. (Philanthropic Educational Organization) which provides educational advancement for female students. She and Bob had extensive collections of depression glass and liked to buy and sell antiques together. Marlys also enjoyed summers growing up at the family cabin in Detroit Lakes, Minnesota. Later, enjoying it with Bob and their 3 boys. Marlys Reimler died in Marshall, Minnesota, on Sunday, December 9, 2018. She had reached the age of 86 years, 7 months, and 17 days. Blessed be her memory. Marlys is survived by her husband of 61 years, Bob Reimler of Marshall; sons, John (Lisa) Reimler of Holmen, WI, Jim (Kathryn) Reimler of Yankton, SD, Thomas (Susan Budig) Reimler of St. Louis Park, MN; 8 grandchildren, Benjamin, Darcy, Willa, Margaret, Sarah, Karen, Joseph, Carl; sister, Carolyn (Chad) Hoyme of Sioux Falls, SD; nieces, nephews, other relatives and many friends. She is preceded in death by her parents, Lester and Gertrude Robson, and sister, Jean (Keith) Paisley.

The family of Marlys Mae Reimler created this Life Tributes page to make it easy to share your memories.

Marlys Reimler, age 86, of Marshall, Minnesota, passed away on...

Send flowers to the Reimler family.