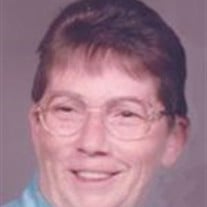 Marlys Sletten Marlys Audrey Sletten, 77, of Mission, Texas, formerly of Marshall, passed away peacefully at her home on November 10, 2010, following a hard-fought battle with cancer. A Celebration of Life her life will be held at 2:00 P.M. on Monday, November 22, 2010 at the Hamilton Funeral Home in Marshall. Burial will be in the Sunset Memorial Memorial Cemetery in Montevideo. Visitation will be Noon until the time of the service on Monday. Condolences may be directed to www.hamiltonfh.com. The youngest of three children, Marlys was born October 2, 1933, in Wood Lake, Minnesota, to Albert and M. Stella (Hahn) Siegel. She was baptized and confirmed at St. John Lutheran Church and attended Wood Lake Public School, graduating in 1951. Marlys’s father passed away in 1936, leaving a young widow and her family to fend for themselves in the midst of the Great Depression. Marlys learned early on to reduce, reuse, and repurpose items long before the “green movement”. She knew you didn’t have to be wealthy to be rich and tried to instill these values in her children. Marlys caught the eye of Norris Sletten, a young man from Wegdahl, Minnesota, in 1950. The couple fell in love and married in Wood Lake on April 19, 1953. To this union, five children were born. They made their home in Montevideo until 1955, then in Caledonia and Redwood Falls, before moving to Marshall in 1962 and Cottonwood in 1991. Following Norris’s retirement in 1988, the couple spent winters in Mission, Texas, and became full-time Texas residents in 2003. Marlys was known for her sewing and knitting skills in her younger years. She became an accomplished domestic engineer whose foremost interests were her family and friends, RVing, good books, soft fuzzy kittens, the beauty of butterflies, country music, helping people in need, and conversations over a good cup of coffee. She was occasionally known to conspire with her children to start remodeling projects around the house, encouraging their creativity and teaching them that hard work can also be fun. Survivors include her devoted husband of 57 years, Norris, and their five children, Marcy (Alan) Roelofs of Tyler, Kevin (Donna) Sletten of Balaton, Traci (Steven) Hussong of Rochester, Jay (Christina) Sletten of Maplewood, and Neil (Pamela) Sletten of West Plains, MO; sister Ramona Worsech of Montevideo, 14 grandchildren, 13 great-grandchildren, many nieces, nephews, cousins, and special friends. Marlys was preceded in death by her father, Albert, in 1936, stepfather William Narr in 1977, brother Lowell Siegel in 1978, and mother Stella Narr in 2002. She is at rest. She is at peace. She is content.

Marlys Sletten Marlys Audrey Sletten, 77, of Mission, Texas, formerly of Marshall, passed away peacefully at her home on November 10, 2010, following a hard-fought battle with cancer. A Celebration of Life her life will be held at 2:00 P.M.... View Obituary & Service Information

The family of Marlys Audrey Sletten created this Life Tributes page to make it easy to share your memories.

Send flowers to the Sletten family.