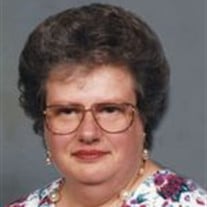 Marshall: Marlys Wohlers, age 63, of Marshall was taken home by her Heavenly Father on Tuesday, July 24, 2007 at the Avera Hospital in Marshall. Funeral Services are scheduled for 10:00 A.M. on Saturday, July 28, 2007 at Good Shepherd Lutheran Church in Marshall. Burial will be in the Marshall Cemetery. Visitation will be 4:00 P.M. to 7:00 P.M. with a 7:00 P.M. prayer service on Friday, July 27, 2007, at the Hamilton Funeral Home. Visitation will continue at the church on Saturday, one hour prior to the service. Marlys Kay Rohlin was born on July 6 , 1944 in Marshall, Minnesota to Fred and Ruth (Flack) Rohlin. She was baptized and confirmed at Christ Lutheran Church in Marshall. Marlys attended school in Marshall and graduated from Marshall High School in 1962. She then went on to Mankato State University and graduated in 1966 with a degree in elementary education. She taught in Anoka for several years before getting married to Bill Dickenson in 1970. They owned and operated a school and charter bus service in Elk River, Minnesota, for many years. On August 14, 1991 she was united in marriage to Harvey Wohlers in Elk River . She was working at Cornelius Corporation in Anoka, as a secretary for the purchasing division from 1990 until 2002. Then she and Harvey moved to Marshall in 2004. Marlys loved playing the organ for Christ Lutheran Church in Marshall and Emmanuel Lutheran Church in Elk River. Marlys enjoyed music, reading, and spending time with her family and friends. Her Heavenly Father took Marlys home on July 24, 2007 at Avera Medical Center in Marshall. She reached the age of 63 years and 18 days. She is survived by her husband, Harvey of Marshall; sister, Carol (and Dr. LeRoy) Affolter of Marshall; niece, Sheri (and Robert) Helgeson of Racine, Wisconsin; four great-nieces and nephews, Jeremy (and Andrea), Krysta, Ashley, and Jordan Meyer; and other relatives. She was preceeded in death by her parents; brothers, William Rohlin and Dr. Bruce Rohlin; and infant brother, Robert Rohlin. Blessed be her memory.

Marshall: Marlys Wohlers, age 63, of Marshall was taken home by her Heavenly Father on Tuesday, July 24, 2007 at the Avera Hospital in Marshall. Funeral Services are scheduled for 10:00 A.M. on Saturday, July 28, 2007 at Good Shepherd Lutheran... View Obituary & Service Information

The family of Marlys Kay Wohlers created this Life Tributes page to make it easy to share your memories.

Send flowers to the Wohlers family.