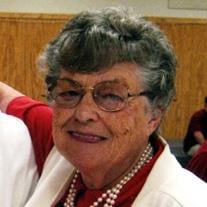 Martha Charline Rokeh, age 91, of Russell, passed away on Friday, May 29, 2015, at Tyler Avera Healthcare Center. Funeral Services are 11:00 AM Tuesday, June 2, 2015, at Grace First Parish in Russell. Interment will follow in the Russell Cemetery. Visitation will be from 4:00 – 8:00 PM Monday, June 1, 2015 at the Hamilton Funeral Home in Marshall with a prayer service scheduled for 7:00 PM. Visitation will continue one hour prior to the service, from 10:00 – 11:00 AM, on Tuesday at the church. Clergy Officiating: Rev. Bruce Drackley Organist: Beth Erdman Congregational Hymns: “In The Garden,” “When The Saints Go Marching In” Soloist: Darrell Giles ~ “My Faith Is First Of All” Trio: Diane Gravley, Jeanene Swift, & Marilyn Gregg ~ “Under His Wings,” “Great Is Thy Faithfullness” Active Casket Bearers: Darin Gravley, Brian Besse, Brad Besse, Jeff Rokeh, Jason Rokeh, Scott Peterson, Shawn Peterson, Josh Gravley Martha Charline Scott was born on December 10, 1923, in Long Beach, California. She was the daughter of Earl W. and Cora L. (Martz) Scott. Martha was baptized and confirmed in August of 1938 in Liberal, Kansas. Martha graduated from the Liberal High School with the class of 1941 and then helped care for her ailing brother in Colorado. She furthered her education to become a beautician. While in Colorado, she met Dennis Rokeh. On January 1, 1955, Martha and Dennis were united in marriage in Colorado Springs. The couple lived there for 30 years while Martha worked as a beauty operator in a salon. IN 1977, Martha followed Dennis to his new calling in Russell, Minnesota. Martha worked in Judi’s Beauty Shop in Russell. They were blessed with over 60 years of marriage and raised her brother’s daughters, Gerry and Linda. Martha served as the city clerk in Russell and retired in October of 1991. She was an active member of both Grace First Parish and the Order Of The Eastern Star. Her other enjoyments in life included fishing, crocheting, traveling to visit family in Colorado and Kansas, wintering with Dennis in Arizona, and spending all of her free time with family and friends. Martha Rokeh entered her heavenly home on Friday, May 29, 2015 at the age of 91 years, 5 months, and 19 days. Blessed be her memory. Martha is survived by her husband, Dennis Rokeh of Russell; 2 brothers, Earl Scott, Jr., of Colorado Springs, CO, Charles (and June) Scott of Hemet, CA; 4 sisters, Ruth Trimmell of Garden City, KS, Nancy Manley of Peyton, CO, Kay Anderson of Colorado Springs, CO, Mary (and Bob) Manley of Peyton, CO; nephews, nieces, other relatives and many friends. Martha is preceded in death by her parents, Earl and Cora Scott; brothers, Gerry Scott, John Scott, and Kermit Dean Scott; sisters, Margaret Ogeltree and Minnie Mae Brune. The family invites attendees to the church basement following the interment for a luncheon.

Martha Charline Rokeh, age 91, of Russell, passed away on Friday, May 29, 2015, at Tyler Avera Healthcare Center. Funeral Services are 11:00 AM Tuesday, June 2, 2015, at Grace First Parish in Russell. Interment will follow in the Russell Cemetery.... View Obituary & Service Information

The family of Martha Charline Rokeh created this Life Tributes page to make it easy to share your memories.

Martha Charline Rokeh, age 91, of Russell, passed away on Friday,...

Send flowers to the Rokeh family.