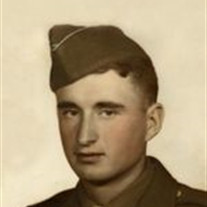 Marvin Loeck, age 84, of Marshall, passed away on Friday, July 25, 2008 at Minneota Manor Health Care Center. Funeral Services are scheduled for 11:00 AM on Tuesday, July 29, 2008 at Christ Evangelical Lutheran Church in Marshall. Visitation will be held from 4 to 8 PM with a 7:00 PM prayer service on Monday, July 28, at the Hamilton Funeral Home in Marshall. Visitation will continue one hour prior to the service on Tuesday, at the church. Burial will be in the St. Peter’s Evangelical Lutheran Cemetery in Balaton. Online condolences available at the www.hamiltonfh.com Marvin Glenn Loeck was born on December 2, 1923, in Rock Lake Township, Minnesota, to Gustav and Julia (Stoering) Loeck. He was baptized December 23, 1923, and confirmed on July 31, 1938 at St. Peter’s Evangelical Lutheran Church in Balaton. He attended school in Balaton, and then farmed with his dad. On December 10, 1944, Marvin was united in marriage to LaVerne Rauschke of Garvin at St. Peter’s Evangelical Lutheran Church in Balaton. To this union, 12 children were born. Marvin entered the U.S. Army on January 20, 1945 and served until November 18, 1946 reaching the rank of Staff Sergeant. He was awarded the Asiatic-Pacific Victory Medal, Good Conduct Medal, and Army of Occupational Medal (Japan). He was a proud member of the American Legion and Veterans of Foreign Wars. Following Marvin’s return from the military, he farmed until his appointment as Postmaster in Balaton on April 2, 1963. He retired on December 30, 1988 and lived in Marshall until his death. He enjoyed traveling with his wife, watching sports, and discussing politics with friends over coffee. He was a faithful member of Christ Evangelical Lutheran Church in Marshall at the time of his death. Marvin passed away at the age of 84 years, 7 months, and 23 days. He is survived by 11 children, Darrel (and Debby) Loeck of Tenstrike, MN, Duane (and Dar) Loeck of Wichita, KS, Sharon (and Glenn) Mitzner of Balaton, Judy Loeck of Oakdale, CT, Sue (and Don) Hansen of Wichita, KS, Nona (and Mark) Lauer of Sartell, MN, Dean (and Jean) Loeck of Apple Valley, Dan Loe of New Ulm, Barb (and Stan) Hammer of Eden Prairie, Jaquelyn (and Johnathan) Schultz of Niantic, CT, Bruce (and Diana) Loeck of Rose Hill, KS, and Gary (and fianc'ee Deanna Hagberg) Loeck of Marshall; 27 grandchildren; 5 great-grandchildren; sisters, Elaine Goltz and Laurice Klukas; and many other relatives and friends. Marvin was preceded in death by his wife, LaVerne; parents, Gustav and Julia; daughter, Jan Loe; and brother, Loren Loeck. Blessed be the memory of Marvin Loeck.

The family of Marvin Glenn Loeck created this Life Tributes page to make it easy to share your memories.

Marvin Loeck, age 84, of Marshall, passed away on Friday, July...

Send flowers to the Loeck family.