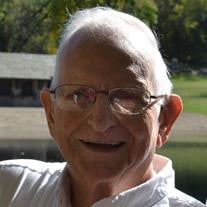 Marvin Eugene Lyddon, age 82, of Marshall and formerly of Chaska, passed away Monday, July 6, 2015 at Morningside Heights Care Center in Marshall. Memorial Services are 11:00 AM Saturday, July 11, 2015 at Christ United Presbyterian Church in Marshall. Interment will be in the Marshall Cemetery. Visitation will be held from 4:00 – 8:00 PM Friday, July 10, at the Hamilton Funeral Home in Marshall. A prayer service is scheduled for 7:00 PM. Visitation will continue one hour prior to the service, from 10:00 – 11:00 AM, Saturday at the church. Clergy Officiating: Rev. Anne Veldhuisen Urn Bearers: Rob Erdman, Roger Lyddon, Jason Phillippe Marvin Eugene Lyddon was born on September 23, 1932 in Winterset, Iowa. He was the firstborn of Wayne and Hazel (Chapman) Lyddon. Marvin attended country school and then graduated with the Winterset High School class of 1950. He then enlisted in the United States Air Force on Feb 19 1952 and served in Korea. He was honorably discharged on Feb 18 1956. Marvin lived in Minneapolis for many years upon returning home. In 1953, Marvin was united in marriage to Grace Fredricks. The couple spent 25 years together and had two sons: Frederick and Warren. In 1973, Marvin was united in marriage to Chrysanne Mary Vollmer in Watertown, South Dakota. They raised her daughter, Barbara, and had another daughter, Mary, in 1975. The couple made their home in Chaska until they moved to Marshall in the fall of 2008 to be closer to their grandchildren. Marvin and Chrysanne spend over 37 years of marriage before she died in February of 2011. Marvin worked as a farmer, a business owner and then spent most of his life as the purchasing superintendent for the Edina school district. He was an active member of Christ United Presbyterian Church in Marshall and Shepherd of the Hill Presbyterian Church in Chaska, where he served as deacon and elder. He was devoted to the Genealogy Society, acting as president at the Minnesota state level for a couple years and then as treasurer for the local group. Marvin enjoyed landscaping, gardening, and flowers. He loved to serve his church and was interested in ancestry and family history. Above all, he cherished time the time spent with his grandchildren. Marvin Lyddon died on Monday, July 6, 2015, in Marshall, Minnesota at the age of 82 years, 9 months and 13 days. Blessed be his memory. Marvin is survived by his sons, Frederick Lyddon of Fortland, MO, Warren “Keith” (and Brenda) Lyddon of Deep River, IA; step-daughter, Barbara (and Ali) Nehrir of Washington DC; daughter, Mary (and Travis) Swanson of Marshall, MN; 7 grandchildren, Kristopher Willis, Shane (and Alyssa) Willis, Sarah “Alyssa” Lyddon, Darina Nehrir, Adrian Nehrir, Payton Swanson, Brock Swanson; 2 great-grandchildren; siblings, Richard Lyddon of Montezuma, IA, Darlene (and Jerry) Shoff of Livingston, MA, Marilyn (and Neal) Day of Winterset, IA; nephews, nieces, other relatives and friends. He was preceded in death by his parents, Wayne and Hazel Lyddon and wife, Chrysanne Lyddon. The family invites everyone to the church basement for a luncheon following the committal service.

The family of Marvin Eugene Lyddon created this Life Tributes page to make it easy to share your memories.

Marvin Eugene Lyddon, age 82, of Marshall and formerly of Chaska,...

Send flowers to the Lyddon family.