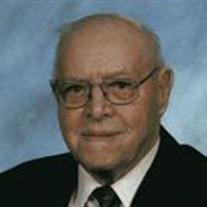 Marvin H. Maronde, age 88, formerly of Marshall, passed away on Sunday, June 13, 2010 at Minneota Manor Care Center. Funeral services are scheduled for Wednesday, June 16, 2010 at 10:30 A.M. at Albright United Methodist Church. Visitation will be 4 P.M. to 8 P.M. Tuesday, June 15, at Hamilton Funeral Home and will continue one hour prior to the service on Wednesday at the church. Burial will be in the Marshall Cemetery. Marvin Harold Maronde was born on November 24, 1921 in Stanley Township to Harold and Evelyn (Meron) Maronde. He also attended school in Stanley Township at District 75 . Marvin served in the US Army during World War II from the Fall of 1944 to the Fall of 1946 in Luzon, Philippines and with the occupational troops in Japan. On September 24, 1949 Marvin was united in marriage to Helen Seiler at the Evangelical United Brethren Church parsonage in Marshall. They lived and farmed in Stanley Township. Marvin served on the Stanley Township Board for 18 years. He also served on the Marshall Cemetery Association Board and was a faithful member of Albright United Methodist Church. His wife Helen passed away on March 16, 1995. Marvin continued to live on the farm until September 1997 when he moved to Hill Street Place in Marshall. In December 2008 he moved to Boulder Estates and in June 2009 he entered Minneota Manor where he passed away on June 13, 2010. He is survived by children, Joyce (Chris) Caugherty of Hendricks, Minnesota, Jerry of Marshall, Elaine (TJ) of Redwood Falls; six grandchildren, Jim (Janean) Caugherty, Lisa (Doug) Tobin, Amy (Michael) Coyle, Jay Maronde, Jeremy Maronde, and Jessica (Charlie) Priebe; nine great grandsons; one step-grandson and two step-granddaughters, sister, Olivene Gagnon, brother in law, Alvin (Donna) Seiler both of Marshall and six nephews and nieces. Marvin enjoyed fishing,camping and playing cards especially Pinochle.

The family of Marvin H. Maronde created this Life Tributes page to make it easy to share your memories.

Send flowers to the Maronde family.