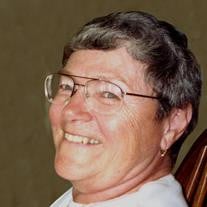 Mary Ann Kor, age 80, of Marshall, Minnesota, died unexpectedly at the Avera Heart Hospital in Sioux Falls, South Dakota, on Friday, January 12, 2018. Mass of Christian Burial is 10:30 a.m. Tuesday, January 16, 2018, at Holy Redeemer Catholic Church in Marshall. Interment will follow in the Lynd City Cemetery. Visitation will be held from 4:00 – 8:00 p.m. Monday, January 15, 2018, at the Hamilton Funeral Home in Marshall. A prayer service is scheduled for 7:00 p.m. Visitation will then continue one hour prior to the service, from 9:30 – 10:30 a.m., Tuesday at the church. Mary Ann Marie Coudron was born on August 12, 1937 in Lyon County, Minnesota. She was the daughter of Emil and Alma (Boudreau) Coudron. Mary Ann was baptized, received first communion, and was confirmed at Holy Redeemer Catholic Church in Marshall, Minnesota. She grew up on the family farm and attended Holy Redeemer School before returning home to help on the farm. On April 11, 1964, Mary Ann was married to Donald Kor at Holy Redeemer Catholic Church in Marshall. They shared over 53 years of marriage together and had one son, Michael. The couple made their home on the family farm for a couple years before Donald’s Military service. They have lived in Marshall since 1966. Mary Ann worked at Swift’s and the Mink Farm before becoming a homemaker when Michael was born. Later on, she served for many years as an ice cream taste-tester for Schwan’s. Mary Ann was a member of Holy Redeemer Catholic Church also the Marshall VFW Auxiliary. Her other enjoyments in life were quilting, bingo, baking Belgian cookies, playing solitaire and other cards games, Wahoo, word finds, watching the “Bold and The Beautiful,” and being outside – especially fishing. She will be dearly missed by those that loved her. Mary Ann entered her heavenly home on Friday, January 12, in Sioux Falls, South Dakota, at the age of 80 years and 5 months. Blessed and eternal be her memory. Mary Ann is survived by her husband, Donald Kor of Marshall; son, Michael (Mary Jo) Kor of Oelwein, IA; sisters-in-law, Aloma Coudron of Marshall, Kathy Coudron of Renville; brother-in-law, Don Schoenberger of Thermopolis, WY; nephews, nieces, other relatives and many friends. She was preceded in death by her parents, Emil and Alma Coudron; and 6 siblings, Evelyn DeMuth, Alice Schoenberger, Melvin Coudron, Agnes Van Overbeke, Donald Coudron, and an infant brother.

The family of Mary Ann Marie Kor created this Life Tributes page to make it easy to share your memories.