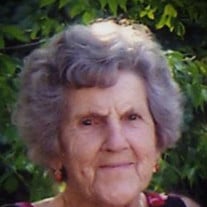 Marshall: Mary E. Hansen, age 97, of Plymouth, Wisconsin formerly of Marshall passed away at the Sheboygan Memorial Hospital in Plymouth on Wednesday, March 12, 2014. Funeral services will be 2:00 P.M. Saturday, March15th at First Baptist Church. Visitation will be 4:00 P.M. to 7:00 P.M. Friday at Hamilton Funeral Home. Visitation will continue at the church on Saturday, one hour prior to the service.Mary Elizabeth (Humphrey) Hansen was born on August 22, 1916, in Adair County, Kentucky to Benjamin and Marvis Emma (Scott) Humphrey. On August 28, 1934, Mary was united in marriage to Everett E. Hansen in Rushmore, Minnesota. They were married for 63 years. Mary and Everett farmed near Garvin for 34 years. They retired from farming in 1975 and moved to Marshall. They were faithful members of the First Baptist Church. Her greatest pleasure was being with and doing things for her family. Mary enjoyed having grandchildren on summer visits, family vacations, and cruises. Gardening and working outdoors were her passions. She was an active member of a flower club. Mary also enjoyed taking care of her cats. She was known for her financial abilities which included her chicken business and active farming partner. Mary loved The Lord and brought her children up in church. She enjoyed a full life and was mentally and physically active until the end. She is survived by her two daughters, Sharon Geiken of Reno, NV and Gail (Thomas) Thompson of Plymouth, WI; seven grandchildren, Mark Geiken Joyner, Lissa Joy Geiken, Shari Lynn Miley, Brigitte Bennington, Spring Breitzman, Heather Thompson, Tiffany Thompson,  seven great grandchildren, Nicole Miley, William Miley, Connor Miley, Brittiany Bennington, Amber Bennington, Kelsey Bennington and Lily Breitzman. Mary was preceded in death by her parents; husband, Everett on October 11, 1998; and three brothers, Roy, Ray and Frank Humphrey.Blessed be the memory of Mary Hansen.

The family of Mary Elizabeth Hansen created this Life Tributes page to make it easy to share your memories.

Send flowers to the Hansen family.