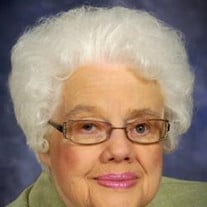 Marshall: Mary J. Henderson, age 79, of Marshall, passed away at her residence on Wednesday, February 12, 2014. Mass of Christian Burial will be 10:30 A.M. Monday, February 17th at Holy Redeemer Catholic Church. Visitation will be 4:00 PM to 8:00 PM on Sunday, February 16, 2014 at Hamilton Funeral Home. Visitation will continue one hour prior to the mass on Monday. Burial will be in the St. Boniface Catholic Cemetery. Mary Julia was born on February 16, 1934 in Chicago, Illinois to George and Dorothy (Grey) Bugee. She was baptized, received First Communion and confirmed in the Catholic faith, and graduated from St. Ita High School in 1952. Mary was united in marriage to Clair “Pete” J. Henderson on March 30, 1974 in Chicago. They eventually moved to Marshall where Mary was a loyal Chicago Cubs fan, and enjoyed bowling, watching movies, listening to music and volunteering at 3rd grade. She was a member of American Legion Post 113 Auxiliary and was a Cancer Survivor. Mary is survived by her four children, David of Iron Mountain, MI, Tim (Diane Newman) of Glen Carbon, IL, Richard of Waukegan, IL and Margaret (George) Collette of Joliet, IL; four grandchildren, Jennifer Fong, Christopher Carvantes, Justin Collette, and Daniel Collette; a great grandson, Joshua Carvantes; also nieces and nephews. She was preceded in death by her parents; husband, Pete (2008); sister, Gloria Hollister; and brother, George Bugee. Mary was a faithful member of Holy Redeemer Catholic Church at the time of her death. Blessed be the memory of Mary J. Henderson.

The family of Mary Julia Henderson created this Life Tributes page to make it easy to share your memories.

Send flowers to the Henderson family.