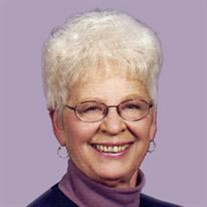 Mary Schwisow, age 78, of Cottonwood, Minnesota, passed away on Saturday, October 28, 2017, at Morningside Heights Care Center in Marshall, Minnesota. Funeral Services are 1:00 p.m. Tuesday, November 7, 2017, at Christ Lutheran Church in Cottonwood, Minnesota. Interment will follow in the Christ Lutheran Cemetery. Visitation will be held one hour prior to the service, from Noon – 1:00 p.m., on Tuesday at the church. Mary Ione Hanson was born February 3, 1939, to Ancel and Clara (Johnson) Hanson. She grew up near Cottonwood, attending school there and graduated with the High School class of 1957. Mary went on the further her education in Minneapolis where she graduated from the Minnesota Business College and then worked at Kenny’s Shoe Store in Minneapolis. On May 7, 1959, Mary was united in marriage to Harold Schwisow. The couple made their home in several places while Harold served in the Air Force. They lived in Colorado, Italy, Arkansas, and California before he retired in 1972. The family then moved to Cottonwood, Minnesota where Mary worked for North Star Mutual Insurance Company until her retirement in 2004. Harold and Mary raised one daughter and shared 53 years of marriage together before he passed away in December of 2012. Mary loved the life of an Air Force wife. She loved the travel, seeing new places and meeting new people. After retiring, they would travel to see Air Force friends that she was able to keep in touch with. Mary also came to love camping and shared that love with her grandson, Jeremy. Mary was devoted to Christ Lutheran Church and served on the Alter Guild for many years and also sang in the choir. Mary was also very involved in the local TOPS group. Mary Schwisow entered her heavenly home on Saturday, October 28, 2017 at the age of 78 years, 8 months, and 25 days. Blessed be her memory. Mary is survived by her daughter, Sherri Schwisow of Cottonwood; grandson, Jeremy Schwisow (And Raquel) of San Francisco, CA; brother, Clifford (Sue) Hanson of Cottonwood; sister, Alnora Pederson of Cottonwood; many nephews, nieces, other relatives and many friends. Mary is preceded in death by her parents, Ancel and Clara Hanson; husband, Harold Schwisow; 2 infant children, Kevin Lewis and Michelle Rene, and 6 siblings.

The family of Mary Ione Schwisow created this Life Tributes page to make it easy to share your memories.

Send flowers to the Schwisow family.