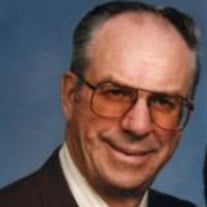 Marshall: Matt E. Verdoes, age 87, of Marshall , passed away at the Avera Morningside Heights Care Center in Marshall on Saturday, December 25, 2010. Funeral services will be 10:30 A.M. Tuesday, December 28, 2010 at Wesley United Methodist Church in Marshall. Burial will be in the Memorial Gardens in Slayton. Visitation will be 5:00 P.M. to 7:30 P.M. with a 7:00 P.M. prayer service Monday at the Hamilton Funeral Home. Visitation will continue at the church on Tuesday, one hour prior to the service. Matt Elmer Verdoes was born to Cornelius and Alice (Tiesenga) Verdoes on July 6, 1923 in Edgerton, Minnesota. He was baptized and confirmed at the Edgerton Christian Reform Church. On December 15, 1953, Matt was united in marriage to Minerva “Min” Lovell in Holland. They farmed near Lake Wilson, Heron Lake and Tracy before moving to Marshall. He retired in 1983. Matt was a member of the Wesley United Methodist Church and his enjoyments in life was farming, going to auctions and playing horseshoe. He really enjoyed doing things with and for his family, especially his grandkids. Matt passed away at the Avera Morningside Heights Care Center on Saturday, December 25, 2010. He had reached the age of 87 years, 5 months and 19 days. He is survived by his loving wife, Min of Marshall; five children, Carolyn (Larry Schultz of Storm Lake, IA, Alan (Marlene) Verdoes of Marshall, Shirley (Joe) VanOverbeke of Marshall, Bruce (Laure) Verdoes of Redwood Falls, and Brian Verdoes of St. Paul; eleven grandchildren, Jessica Boehler, Jennifer Schultz, Laura Jenson, Kelsey Verdoes, Jonathon Schultz, Travis VanOverbeke, Kevin Verdoes, Kyle Verdoes, Matt Verdoes, Nick Verdoes; Christopher Verdoes; four great grandchildren; two sisters, Dorothy Becker of Holland and Roselen Swanson of Eden Prairie; and many other relatives and friends. He was preceded in death by his parents; infant daughter, Cynthia; sister, Rose Perkins; and brother, Jack Verdoes.

The family of Matt Elmer Verdoes created this Life Tributes page to make it easy to share your memories.

Send flowers to the Verdoes family.