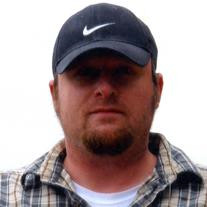 Matthew Haas, age 36, of Marshall, Minnesota, died on Monday, August 28, 2017, in Worthington, Minnesota, after a long struggle with mental illness. He is finally free. Memorial Services are 4:00 p.m. Friday, September 1, 2017, at Christ United Presbyterian Church in Marshall. Interment will be at a later date in the Russell Cemetery, Russell, Minnesota. Visitation will be held one hour prior to the service, from 3:00 – 4:00 p.m., Friday at the church. Matthew John Haas was born October 4, 1980. He grew up in Ghent, surrounded by an extended family that loved him dearly. He was a hilarious child who could put a smile on anybody’s face, whether he was making up new lyrics to a song or trying to sell you his “discount” fly swatters. Matt’s mental illness made adulthood very difficult, but he stayed connected with his family. He enjoyed fishing, playing cards, and watching the funny antics of his nephews. His mother Taryn had a close relationship with him, and he loved teasing “Hedge” about her motherly love. Matt spent the past year in a loving relationship with his girlfriend, Mary Newton. Her kindness and compassion made this one of the best years of his life. Blessed be his memory. He is survived by his mother, Taryn Gemelke, and his stepfather, Brad Jackson of Ghent; his father, Michael Haas of Faribault; his brother, Michael (Suzy Buesing) Haas of Marshall, his girlfriend, Mary Newton of Marshall, his aunt Ruby (Freddie) Stumm, his uncle Regan (Shelly) Gemelke, his uncle Tobi Gemelke, and many other relatives who loved him deeply. Matt was preceded in death by his grandparents, Robert and Jeannette Gemelke and Albert and Margaret Haas, and his stepmother, Becky Haas.

The family of Matthew John Haas created this Life Tributes page to make it easy to share your memories.

Send flowers to the Haas family.