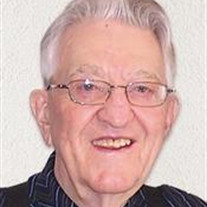 Russell: Maurel Lang, age 89, of Marshall, formerly of Russell, passed away Wednesday, August 31, 2011 at the Prairie Home Hospice House. Funeral services will be 11:00 A.M. Saturday, September 3, 2011 at Christ Evangelical Lutheran Church. Burial will be in the Russell City Cemetery. Visitation will be 4:00 P.M. to 8:00 P.M. Friday at the Hamilton Funeral Home. Visitation will continue at the church on Saturday one hour prior to the service. Maurel Franklin was born on July 25, 1922 to parents Edward Grover and O’Lina (Wilman) Lang. He was baptized at the Hemnes Lutheran church and confirmed at the Zion Evangelical Lutheran Church in Island Lake Township. Maurel was united in marriage on April 12, 1944 to Dorothy Mildred Anderson at the Zion Evangelical Lutheran parsonage. They farmed in Coon Creek Township and sold seed corn for a number of years. He worked for the Southwest Minnesota Dairy Association for 17 years, and finally moved to Marshall. He was a member of the Russell Cemetery board, Russell Housing board, Russell Saddle Club and was the secretary-treasurer for AAL. His enjoyments included, playing his accordion and guitar, entertaining at many nursing homes, trail riding with friends, camping with friends, playing on several horseshoe teams, bowling and visiting with family and friends. .Maurel passed away at the Prairie Home Hospice House on Wednesday, August 31, 2011. He had reached the age of 89 years, 1 month and 6 days. He is survived by his loving family, wife Dorothy of Marshall; daughter and son-in-law, LaVonne (and Keith) Peck of LeSueur; two grandchildren, Kristin (and Trent) Isaacson of St. Stephen and Troy (and Jennifer) Peck of Minnetonka; a sister, Audrey (and Alton) Johnson of Orland, CA; and sister-in-law, Marjorie Lang of Vale, SD. He was preceded in death by his parents and two brothers, Virgil and Arlen Lang. Maurel was a faithful member of the Christ Evangelical Lutheran Church at the time of his death. Blessed be the memory of Maurel Lang. Please designate memorials to Prairie Home Hospice

The family of Maurel Franklin Lang created this Life Tributes page to make it easy to share your memories.