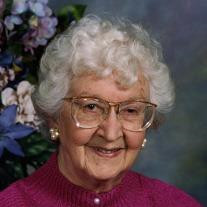 Maurine Opal Hudson, age 97, of Marshall, passed away Thursday, April 30, 2015 at Morningside Heights Care Center in Marshall. Memorial Services are 1:00 PM Thursday, May 7, 2015 at Wesley United Methodist Church in Marshall. Interment will follow at a later date in the family plot in Holman Township Cemetery, Sibley, Iowa. Visitation will be one hour prior to the service, from Noon – 1:00 PM, Thursday at the church. Clergy Officiating: Rev. Wes Johnson Organist: Loronda Schuler Congregational Hymns: “There’s A Song In The Air,” “His Eye Is On The Sparrow” Special Music: Scott & Hannah Hudson, Duet and Chris Hudson, Pianist ~ “The Lord’s Prayer,” “Abide With Me” Urn Bearers: Maurine’s grandchildren: Lisa (Jesse) Frank, Mark Hudson, Emily Hudson, and Hannah Hudson and great-grandchildren: Jared Inserra, Jayden and Connor Hudson, Shayla and Jamie Lynn Frank Maurine Opal Orcutt was born on January 29, 1918, in Wall Lake Township, Sac County, Iowa. She was the eldest of three children born to Vergil and Mary (Gosswiller) Orcutt. Maurine was baptized as an infant and confirmed in her youth in the Christian faith. Her family moved when she was a child to Clarion, Iowa, where she graduated high school with the class of 1934 at age 16. She went on do to secretarial work. On October 12, 1941, Maurine was united in marriage to Donald C. Hudson in Norfolk, Nebraska. The couple lived in Norfolk prior to Donald’s military service. Once Don returned home, the couple lived in several places while Donald served as store manager for J. C. Penney. They lived in several towns in Nebraska, Kansas, South Dakota, and Minnesota. He retired from J. C. Penney in 1975 while they lived in Marshall. They shared over 43 years of marriage before Don died in April of 1985. Maurine was a loving homemaker and mother, the glue that held the family together. She was a strong lady who was ever supportive and gracious. Maurine was a member of the VFW Auxiliary, WSCS of the Methodist Church, and belonged to a bridge club and study club. Her other enjoyments in life included playing the piano and singing – she belonged to the church choir in every town they lived. She always had a crossword puzzle within reach and enjoyed bowling in league, fishing, and Minnesota Twins baseball. She also served as secretary for the local food shelf. Maurine passed away on Thursday, April 30, 2015, in Marshall, Minnesota at the age of 97 years, 3 months and 1 day. Blessed be her memory. Maurine is survived by her Sons, Mick (and Marlys) of Bloomington, Minnesota, Scott (and Chris) of Downers Grove, Illinois; grandchildren, Lisa (Jesse) Frank, Mark Hudson, Emily Hudson, and Hannah Hudson; great-grandchildren, Jared Inserra, Jayden and Connor Hudson, Shayla and Jamie Lynn Frank; many nieces, nephews, other relatives and friends. She was preceded in death by her parents, Vergil and Mary Orcutt; husband, Donald Hudson; sister, Shirley Renfro; brother, Duane Orcutt; and nephews, Gary and Gordon Aupperle. A special and sincere thank you goes out to Morningside Heights Care Center and its compassionate staff. She gained another family spending nine years in your care. The family invites everyone to the church basement immediately following the service for a luncheon.

The family of Maurine Opal Hudson created this Life Tributes page to make it easy to share your memories.

Send flowers to the Hudson family.