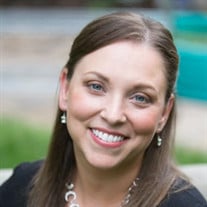 Megan Pavot, age 38, of Spring Park and formerly of Marshall, Minnesota, died on Saturday, November 16, 2019, at the Mayo Clinic Hospital in Rochester, Minnesota. Memorial Services are 3:00 p.m. Saturday, December 7, 2019, at the Hamilton Funeral Home in Marshall, Minnesota. A reception will follow at the SMSU Campus Religious Center, beginning at 4:00 p.m. Visitation will be held one hour prior to the service, from 2:00 – 3:00 p.m., on Saturday at the Hamilton Funeral Home. We invite you to wear something sparkly in her honor. Megan Joy Pavot was born on October 5, 1981, to William and Pam (Jefferson) Pavot in Rensselaer, Indiana. Her family moved to Marshall, MN, when she was in 5th grade. She attended school in Marshall, graduating in 1999. Megan attended Southwest Minnesota State University in Marshall, graduating in 2003, and then received a master’s degree in Industrial Organizational Psychology from Minnesota State University – Mankato in 2005. Her internship led to her full-time position as a statistician for Clario, based in Eden Prairie, Minnesota where she has worked since college with some amazing co-workers. Megan served on the Spring Park City Council where she took pride in saving money for residents and doing what was right for the city, not just what she thought would be popular. A few of her favorite projects as councilwoman included the building of a community vegetable garden and the renovation of an outdated playground to make it safe and accessible for all children. Megan was passionate about rescuing animals. She was active with Secondhand Hounds and Pet Project Rescue. She relocated hundreds of feral and adoptable cats. Along the way, she also fostered cats in her home while they were waiting to be adopted so that they wouldn’t be euthanized. It was during this time that she found Winston. She was able to bring about a profound change in the treatment of feral cats that found themselves in shelters in the Twin Cities. Megan is also remembered for her musical talent. She sang with All My Favorites, Screamin’ Cactus Band, Skewed View, and with Meg and Moni and the Conference Room Acoustics. Megan was the lead role in West Side Story in college, she sang jazz with Ross Anderson and sang for countless weddings for friends and family. Megan had a number of serious health struggles in her adult life. She was diagnosed with lymphoma at the age of 19 which required chemotherapy, radiation and a stem cell transplant. It is likely that her treatment from this cancer contributed to her sarcoma diagnosis in 2018. She faced this new diagnosis with a desire to live and to fight the cancer as she had done before. Megan is survived by her loving parents, Dr. William and Pam Pavot of Marshall; sister, Nikki (Ryan Fuhr) Pavot of Andover; beloved niece and nephew, Gavin Fuhr, and Selene Fuhr; grandmother, Shirley Jefferson of Rensselear, IN; her rescue cat, Winston; other relatives and many friends. She was preceded in death by her grandparents, Edwin Jefferson, Josephine Tanchala, and Paul Pavot.

The family of Megan Joy Pavot created this Life Tributes page to make it easy to share your memories.

Megan Pavot, age 38, of Spring Park and formerly of Marshall,...