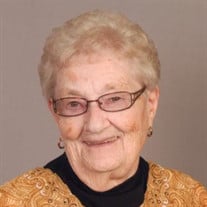 Melba Pack passed away peacefully at the Avera Marshall Regional Medical Center on Wednesday, January 6, 2021, at the age of 93 years, just two weeks shy of her 94th birthday. Her four children and their spouses were all with her, either at her bedside or online virtually due to Covid-19 restrictions, as she yielded herself to her Lord and Savior. Memorial Services will be at 11:00 a.m. Friday, February 12, 2021, at Cornerstone United Methodist Church in Marshall, Minnesota. Interment is scheduled for 12:15 p.m. in the Walnut Grove Cemetery. The graveside service is also open to the public, should local friends want to attend. A walk-through visitation will be held from 9:00 - 11:00 a.m. Friday, February 12, 2021, at Cornerstone United Methodist Church in Marshall. Occupancy limits and social distancing must be observed throughout all services. Masks are required at all public indoor gatherings. A live stream and recording of the service will be available at https://www.facebook.com/CornerstoneMarshall. In lieu of flowers, the family requests any memorial contributions be given to the family for a future designation. Melba Faye Brass was born to Elmer Manley and Stena (Ebeling) Brass in Worthington on January 20, 1927, the first of two children. She was baptized in Luverne and confirmed in the Worthington Presbyterian Church. The family lived in several towns in Iowa and Minnesota before settling in Rushmore. She attended Rushmore Elementary School for three years and completed her schooling at Worthington, graduating in 1944. Melba completed the accelerated two-year teachers’ course at Mankato Teachers College in 1946 and began her long career as an elementary teacher at Walnut Grove. It was there she met Clifford LeRoy Pack and they were married on July 2, 1948, at the Presbyterian Church in Worthington. They lived on Cliff’s parents’ farm in rural Walnut Grove where they raised their four children. She taught two years in Walnut Grove and one year in Redwood Falls. After taking a leave to raise her family, she resumed her teaching career in Lucan. In 1970 she returned to Walnut Grove where she taught until her retirement in 1989. While teaching, she earned her four-year teaching degree in 1971, where she graduated with the Charter class of Southwest Minnesota State College. In 1973 Cliff and Melba moved into Walnut Grove. After Cliff’s death on May 9, 2002, Melba sold their house and relocated to Marshall. On November 1, 2017, Melba moved to Boulder Estates Assisted Living in Marshall, where she was currently residing. Melba and Cliff were active members of the Walnut Grove United Methodist Church for many years. Melba served as a Superintendent and teacher for Sunday School, was a member and office holder of the Women’s Society of Christian Service and United Methodist Women. She belonged to the Twentieth Century study club and was in charge of the Walnut Grove food shelf for several years. She was also a member of the Redwood County Reading Association. After moving to Marshall, she became a member of the Albright United Methodist Church and was currently a member of Cornerstone United Methodist Church. You could usually find her seated at the ticket table for their baked potato suppers. She also looked forward to the fellowship in the bible study group. She was a member of the Marshall Adult Community Center where she volunteered and actively took part in many programs, including the Reading Club. Melba and Cliff loved to travel, especially by tour bus, where they made many life-long friends. They looked forward to renewing friendships each winter in Apache Junction, AZ. Melba and Cliff were devoted fans of Minnesota sports teams, especially the Twins, Vikings and Gophers. While living in Walnut Grove, they opened their home as a bed and breakfast on the weekends of the Laura Ingalls Wilder Pageant. Melba was an avid reader and card player and enjoyed most any card game offered, but she especially relished playing pinochle with her grandchildren who battled to be her partner. She eagerly followed the school and sports activities of three generations: her 4 children, 14 grandchildren, and 29 great-grandchildren. Melba wrote they were the gems of her life and her family were the jewels in her crown. Melba will be lovingly remembered by her children: Cheryl (James) Jacobson of Mora, Candyce (Robert) Monson-Sowers of Benson, Bryce (Debra) Pack of Lamberton, and Todd (Debi) Pack of Buffalo; her grandchildren: Jason (Bonnie Sykes) Jacobson and their children Andrew and Emily Sykes, Carter and Isabella Jacobson; Ryan (Lora) Jacobson and their sons Jonah and Lucas; Scott Jacobson; Tory (Sherrie) Monson and their children Landon, Riley and Avery; Jesse (Andria) Monson and their sons Joshua and Jonathan; Molly (Bryan) Verhelst and their daughters Kalee and Emily; Carmen Sowers, and Kevin (Tracy) Sowers and their children Angelina and Monroe; Chris (Linda) Pack and their children Rachel, Ethan, Seth, and Nolan; Nicholas Pack and his daughter Ava; Casey (Monica) Pack and their sons Caleb and Asher; Colby (Sarah) Pack and their sons Braiden and Dylan; Chelsea (Jeremy) Marquardt and their children Ezekiel and Quincee; Taylor (Jessica) Pack and their daughters Julia, Jillian, and June; sister-in-law, Gloria Pack; a niece, nephew, and multitude of cousins. She is also remembered by her foreign exchange student son, Lauri Lundbom of Thailand and Elaine Meinders (Richard) Eichmann of Dell Rapids, SD, who lived with the family for a few years when the children were young. Melba was preceded in death by her husband, Clifford; an infant grandson, Mychal Pack; parents, Elmer and Stena Brass; parents-in-law, Lloyd and Grace Pack; brother, Maynard Fay Brass and his wife, LaVonne; Cliff’s siblings: Wendelina Sanderson, Genevieve DeCourcy, Lolita Gremmert, Violet Koehler, and Warren Pack. Blessed be her memory.

Melba Pack passed away peacefully at the Avera Marshall Regional Medical Center on Wednesday, January 6, 2021, at the age of 93 years, just two weeks shy of her 94th birthday. Her four children and their spouses were all with her, either at... View Obituary & Service Information

The family of Melba Faye Pack created this Life Tributes page to make it easy to share your memories.

Melba Pack passed away peacefully at the Avera Marshall Regional...

Send flowers to the Pack family.