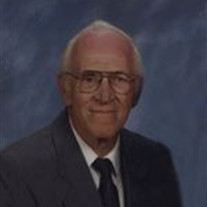 Services for Melvin “Mel” Winter, 76, of Minneota will be 10:30 a.m. August 29, 2007 at Zion Evangelical Lutheran Church, Island Lake Township. Burial will be at the Zion Evangelical Cemetery. Visitation will be Tuesday, August 28, 2007 4 to 8 P.M. with a 7:00 P.M. prayer service at the Hamilton Funeral Home. Visitation will continue at the church on Wednesday one hour prior to the service. After a long courageous battle with cancer and surrounded by his loving family, Mel passed away on Saturday, August 25, 2007 at the Avera Marshall Regional Medical Center. Mel’s cancer diagnosis did not deter his once-in-a-lifetime moose hunt and he constantly amazed his doctors with his resilience. Melvin was born September 12, 1930 to Herman and Amanda Winter in Canby, MN. He was baptized at the Lutheran Church in Canby and confirmed at the Zion Evangelical Lutheran Church, Island Lake Township. He read and studied the Bible, using the Strong’s concordance and the Interlinear (Hebrew, Greek, and English) Bible to aid in his study. Mel grew up on a farm in Island Lake Township and attended Lynd High School. He was drafted into the military and graduated from diesel engineering school in Washington, DC and served in the Korean War. He was a member of the VFW and he drove his antique cars for the “Gold Star” Mothers at parades. On August 6, 1955 Mel was united in marriage to Lois Johnson in Ivanhoe. They raised their three children on their farm home near Minneota where he resided until his death. In the early 60’s Mel purchased a 1915 Aultman-Taylor 30-60. This beautiful tractor was selected as the “Favorite Early Restoration” by Iron Memories, on the 1994 DuPont Classic tractors calendar, Farm Journal, and many other local newspapers. It received national recognition and was a crowd pleaser at many threshing shows. The decal for the Aultman-Taylor, which he researched and recreated, appears on tractors from coast to coast. After the restoration of the 1915 Aultman-Taylor, Mel replicated the classic tractor in a 1/6 scale running model. Using his inventive mind, he built all the parts and poured the castings. When people expressed amazement at his skill, Mel would say “the secret is to throw the word 'defeat' out of your vocabulary.” Mel also built a working 1/3 scale model of a John Deere B, complete with plow. His hand-crafted works are testimonies of his achievements. Mel formed the Lakeland Troubador country western band in 1959 and played for numerous events until the early 1990’s. Mel played the pedal steel guitar which he built himself. Mel’s enjoyments in life consisted of family, fishing, hunting, videoing of birds, restoring antique automobiles and tractors, visiting with numerous friends, and traveling. Mel was noted for his sense of humor and his ability to make others laugh. Survivors include his wife, Lois, two sons; Craig (Jean) of Minneota; Brian (Sonia) of Glyndon; and one daughter, Brenda Kleine (Doug) of Lynd; nine grandchildren: Ryan (Rachel) Winter, Travis (Chelsea) Kleine, Tara Winter, Jamison Winter, Melissa Koska (Joe), Jessica Winter, Daniel Kleine, Eric Winter, and Jeremy Winter; brothers, Lester, Larry, Dennis, Roland and Robert; sisters, Marion Pierce and Doris Lovel and numerous nieces and nephews. Mel was preceded in death by his parents and his brother-in-law Harold Pierce. Blessed be the Memory of Melvin Winter. Please designate memorials to Zion Evangelical Lutheran Church or the American Cancer Society.

Services for Melvin &#8220;Mel&#8221; Winter, 76, of Minneota will be 10:30 a.m. August 29, 2007 at Zion Evangelical Lutheran Church, Island Lake Township. Burial will be at the Zion Evangelical Cemetery. Visitation will be Tuesday, August... View Obituary & Service Information

The family of Melvin "Mel" Winter created this Life Tributes page to make it easy to share your memories.

Send flowers to the Winter family.