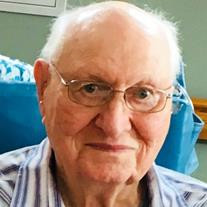 Merl "Dempsey" Lee, of Minneota, formerly of Marshall, Minnesota, died on Friday, September 21, 2018, at the Minneota Manor Health Care Center. Memorial gathering of family and friends will be held from 11:00 a.m. – 1:00 p.m. Friday, September 28, 2018, at Hamilton Funeral Home in Marshall, Minnesota. A light lunch will be provided. Private Interment will be in the Marshall Cemetery with military honors provided by Marshall American Legion, Post #113. Merl Adolph Lee was born April 9, 1927, near Revere, in New Hope Township, Redwood County, Minnesota. He was the 7th of 9 children born to Henry and Freida (Riem) Lee. Merl attended country school and graduated from the 8th grade. He worked as a hired hand for both his father and many area farmers. At age 17, Merl enlisted in the United States Navy on April 4, 1945. He was honorably discharged on July 20, 1946. Upon returning home, Merl worked for Schearing family farms near Slayton and also Olson and Johnson of Marshall. Merl was then hired, in 1951, by the O’Connell Motor Company as a mechanic. He was talented, able to diagnose and repair almost any mechanical engine. Merl was gifted with ingenuity and common sense, and he used those talents daily. Some years ago, a young man who respected Merl’s abilities and work ethic, approached Merl with an idea to establish a repair depot to service his future fleet of trucks. Merl declined the offer, choosing the security of his current employer… that young man was Marvin Schwan. On November 13, 1949, Merl was married to Marilyn Jean North at Wesley United Methodist Church Marshall, Minnesota. The couple made their home in Iona and then Marshall. They were blessed with 2 children, Paulette and Richard. Marilyn and Merl were married for 16 years before her untimely death in 1966. Merl dedicated himself to raising his children. He was a father first and foremost, and as his children grew, he joined in their many outdoor activities. He especially liked hunting and fishing, spending many weekends at the lake. The catch of the day was often served for supper that evening. Merl enjoyed playing cards at family gatherings with his brothers, sisters, and in-laws. Smear and Buck Euchre were family favorites. Merl died September 21, 2018, at the age of 91 years, 5 months, and 12 days. Blessed be his memory. He is survived by his children, Paulette (Bruce) Marks of Marshall, Richard (Brenda) Lee of Marshall; grandchildren, Kristy (Rod) Guza of Minneota, Nicholas (Amanda) Marks of Salem, OR, Jerred Lee (Jamie Schultz) of Marshall; great-grandchildren, Wyatt Guza, Reese Guza, Logan Lee (Robirds); many nieces, nephews, other relatives, and friends. Merl was preceded in death by his parents; wife, Marilyn Lee; siblings; and a grandson, Jeremy Wade Marks.

The family of Merl "Dempsey" A. Lee created this Life Tributes page to make it easy to share your memories.

Send flowers to the Lee family.