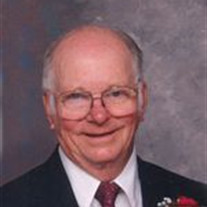 Merle Mattson, age 85, of Marshall, passed away at Morningside Heights Care Center on Friday, November 21, 2008. Funeral Services are scheduled for 11 A.M. on Monday, November 24, 2008 at St. Stephen Lutheran Church in Marshall. Burial will be in Marshall Cemetery. Visitation will be held from 4:00 P.M. to 8:00 P.M. with a prayer service at 7:30 P.M. on Sunday, November 23 at the Hamilton Funeral Home in Marshall. Visitation will continue at the church on Monday, one hour prior to the service. Online condolences may be submitted at www.hamiltonfh.com. Merle Duaine Mattson was born on June 25, 1923 in Lake Lillian, Minnesota to parents Arthur and Nime (Olsen) Mattson. He spend his school years in Blomkest, Minnesota and later his family moved to Watertown, Minnesota. Upon his high school graduation in 1941, he worked as Minnesota’s youngest Depot agent in Gluek, Minnesota for the Minnesota and Western Railroad. Merle was drafted into the United States Army in 1943. He was honorably discharged in 1946 and began attending the Minnesota School of Business in Minneapolis where he studied accounting. During this time, Merle was united in marriage to Lois Vidlund on August 16, 1947 at Gotaholm Lutheran Church in Watertown (Minnesota). They moved to Minneapolis where they lived for 17 years. Merle then accepted a position with Minneapolis Northfield and Southern Railroad as a yard clerk. He also worked at Globe Plumbing in Minneapolis as an accountant. Meanwhile, he returned to the Minnesota School of Business to study Court Reporting and graduated in 1964. In 1964, Merle and Lois and their young family moved to Willston, ND, when he accepted a job as District Court Reporter for Judge Eugene Burdick. In 1966, Merle, Lois and their family relocated to Marshall and he worked as a District Court Reporter for Judges Walter Mann, George Harrelson and George Marshall until his retirement on May 15, 1987. After retirement he served as guardian ad litum as well as court bailiff, along with his wife, Lois. Merle was a great story teller and especially liked telling jokes. During some of his retirement years, Merle and Lois wintered in Arizona. He also enjoyed woodworking and attending musicals and plays. Merle had been a Scoutmaster with the Boys Scouts and Sunday school teacher. His other enjoyments included gardening, playing cards, HAM radio, golfing, fishing, camping and running marathons, (his first one run at age 60). He also enjoyed participating in the Tuesday Morning Men’s Bible Study. Merle’s greatest enjoyment in life was spending time with his family and friends. Merle entered Avera Morningside Heights Care Center on November 6, 2008, where he passed away on Friday, November 21. He had reached the age of 85 years, 4 months and 26 days. Merle is survived by his wife, Lois of Marshall; sons, Bruce (Susan) of Omaha, Nebraska, Todd (Kristine) of Morris; daughter, Barbara Zust (Roger McKnight) of St. Peter; nine grandchildren, Andrew Mattson, Matthew Zust, Kelli Mattson, Kristin Zust, Seyward Mattson, Gunner Mattson, Anna Zust, Sibley Mattson and Mackenzie Mattson; and one great- grandchild, Chase Andrew Mattson; one sister Margie Bueide of New Milford, Connecticut; in-laws, ElRoy Vidlund and Shirley (Roger) Tatting, and Marge Vidlund; and several nieces and nephews. Merle was preceded in death by his parents; a sister, Dorothy Lorraine Mattson; and in-laws, James Buide, Merlyn Vidlund, and Dorothy Vidlund. At the time of his death, Merle was a faithful member of St. Stephen Lutheran Church, where he had served on several committees. Blessed Be The Memory of Merle Mattson.

The family of Merle Duaine Mattson created this Life Tributes page to make it easy to share your memories.

Merle Mattson, age 85, of Marshall, passed away at Morningside...

Send flowers to the Mattson family.