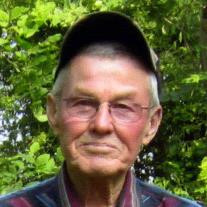 Michael Paul Buesing, age 73, of Lynd Township, Minnesota, passed away on Wednesday, February 17, 2016, at the Minneota Manor Care Center. Funeral Services are 10:30 AM Tuesday, February 23, 2016 at Cornerstone United Methodist Church in Marshall (202 N 4th St, Marshall, MN 56258). Following a reception, interment will be later that day in the Lynd City Cemetery. Visitation will be held from 4:00 – 8:00 PM Monday, February 22, 2016, at the Hamilton Funeral Home in Marshall. A prayer service is scheduled for 7:00 PM. Visitation will continue one hour prior to the service, from 9:30 - 10:30 AM, on Tuesday at the church. Clergy Officiating: Rev. David Johnston Organist: Loronda Schuler Congregational Hymns: How Great Thou Art / Precious Lord, Take My Hand / Amazing Grace Active Casket Bearers: Don Girard, Jon Mellenthin, Norb Blanchette, Val Nelson, Jack Lanners, Steve Simmons Honorary Casket Bearers: Mike’s grandchildren ~ Kaleb Buesing, Miranda Buesing, Seth Buesing, Aidan Buesing, Chase Buesing, Katherine Buesing Michael Paul Buesing was born on July 20, 1942, at home in rural Russell, Minnesota. He was the son of Arnold and Genevieve (Wixon) Buesing. Mike was baptized as an infant and then confirmed in his youth at Marshall Methodist Church. He attended school in Russell and then Lynd where he graduated from High School in 1960. Mike went on to help his parents in the farm and work at Tubb’s Texaco in Marshall. Mike met Sandra Andersen in the fifth grade and they started dating at age 16. Five years later, on September 7, 1963, Mike was united in marriage to Sandy at the Evangelical United Brethren Church in Marshall. In the spring of 1964, the couple began farming north of Lynd in Lynd Township. They shared 52 years of marriage had four sons: Perry, Aaron, Neil, and Val. Mike farmed near Lynd from 1963 until he retired in 2006. He was a member of the Lynd Township Board for over 30 years, serving as chair for a number of those years. He was on the Lyon County Zoning Board for 8 years, the most allowed. Mike was a long-time member of Wesley now Cornerstone United Methodist Church in Marshall. Mike was a loving man and a good father who put family first. He always enjoyed having coffee with his neighbors and friends. He always found time to work on cars and tractors, attend an auction sale, go deer hunting, or scheme up a good-natured prank on the neighbors. He enjoyed red glass antiques and collected Farmall and Case-IH toy tractors for over 26 years, totaling more than 700 pieces. Mike took pride in his working antique tractors and showed them in many parades. Michael Paul Buesing went to his heavenly home on Wednesday, February 17, 2016, at the age of 73 years, 6 months, and 28 days. Blessed be his memory. Mike is survived by his wife, Sandy Buesing of Marshall; children, Perry Buesing of Lester Prairie, Aaron (and Denise) Buesing of St. Paul, Neil (and Lisa) Buesing of Rosemount; six grandchildren, Kaleb, Miranda, Seth, Aidan, Chase, and Katherine Buesing; brother, Jeffrey (and Mary Jo) Buesing of Marshall; sister-in-law, Monna Buesing of Russell; brother-in-law, Gene Bruss of Minneapolis; pets, Tom and Boomer; nephews, nieces, other relatives and many wonderful friends. Mike is preceded in death by his infant son, Val Christian Buesing; parents, Arnold and Genevieve Buesing; brother, Arnold “Junior” Buesing, and sister, Kathleen Bruss.

The family of Michael Paul Buesing created this Life Tributes page to make it easy to share your memories.

Send flowers to the Buesing family.