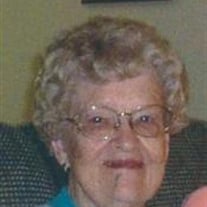 Mildred Johnson Marshall; Mildred Johnson, age 94, of Marshall, passed away on Sunday, February 5, 2012 at the Morningside Heights Care Center in Marshall. Funeral services will be 11:00 A.M. Wednesday, February 22nd at the Marshall Evangelical Free Church. Visitation will be 4:00 P.M. to 7:00 P.M. Tuesday at the Hamilton Funeral Home. Visitation will continue at the church on Wednesday, one hour prior to the service. Mildred Alvena Evangeline was born on January 19, 1918 in Newman Grove, Nebraska to Alvin Ernest and Hattie Mathilda (Nelson) Johnson. She was baptized and confirmed at the Zion Lutheran Church in Newman Grove. Following graduation from high school, she attended Wayne State University and Mankato Teachers College. She taught country school in Nebraska for two years and then 2nd and 3rd grades at Madelia and Renville, Minnesota. On February 15, 1943, Mildred was united in marriage to Urban Johnson at her parents’ home near Balaton, Minnesota. They farmed near Ruthton for several years before moving to Urban’s family homestead near Balaton. She was a member of the Sillerud Lutheran Church where she was Sunday School Superintendent for many years and served as president of the Ladies Aid. She was also a member of the Extension Club and did substitute teaching. After moving to Marshall, she was a member of the Marshall Evangelical Free Church and the Gideon Auxiliary. She promoted the existence of the Marshall Area Adult Center and was one of the first officers. Besides spending time with family and friends, Mildred’s other enjoyments included sewing, knitting, crocheting and reading. She will be remembered for her great sense of humor. Mildred passed away Sunday, February 5, 2012 at the Morningside Heights Care Center in Marshall. She had reached the age of 94 years and 17 days. She is survived by her two children, Laurel Johnson of Marshall and Carleton (and Anne-Marie) Johnson of Tomah, Wisconsin; a granddaughter, Christina (and Jason) Anderson of Minneapolis; and a great granddaughter, Justine Alice Anderson. She was preceded in death by her parents; husband, Urban; sister, Evelyn Gould; and brother, Quentin Johnson. Blessed be the memory of Mildred Johnson.

The family of Mildred Johnson created this Life Tributes page to make it easy to share your memories.