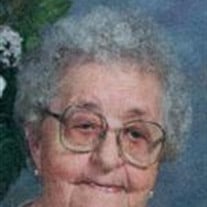 Marshall: Minnie Emma Luckow, age 94, of Marshall, passed away on Friday, January 28, 2011 at Morningside Heights Care Center. Funeral services will be held on Thursday, February 3, 2011 at 11 AM at St. Stephen Lutheran Church in Marshall. Burial will be at 3 PM in the Cambria Cemetery, Cambria, Minnesota. Visitation will be held Wednesday, February 2 at the Hamilton Funeral Home at 4 PM to 8 PM with a prayer service at 7 PM. Visitation will continue one hour prior to the service at the church on Thursday. Minnie Emma Louise was born October 26, 1916 to Karl and Martha (Lettau) Teichert on a farm near Maynard, Minnesota. She was baptized on December 10, 1916 at Trinity Lutheran Church in Havlock Township. On November 26, 1936, Minnie was united in marriage to Herold Luckow at Trinity Lutheran Church. They first resided in DeGraff, and then in Marshall where she was a cook at Rains Café. In 1968, they moved to Cambria where they owned and operated Luke’s Place. Minnie and Herold spent many years in Cambria before returning to Marshall. Herold passed away on April 12, 1977 and Minnie joined him in death on Friday, January 28, 2011 at the Morningside Heights Care Center. She had reached the age of 94 years, 3 months and 2 days. Minnie is survived by her four children; Doris (friend, Gene Wollschlager) Furness of Austin, Edward (and Ruth) of Maple Grove, Ardis (and Roger) Green of Lynd, and Beverly (and Tommie) Holley of Orlando, Florida; 10 grandchildren; DeAnna (Thomas) Fragett, Tammy (and Dan) Steffl, Brian Minkel, Nadene (and Nick) Weil, Jill, Anne and Laura Luckow, Heidi (and Marius) Laursen, Gretchen (and Wayne) Boerger, and Nathan (and Laura) Green; two step grandchildren, David and Jon Holley; 10 great grandchildren; Avery and Grayson Laursen, Quinn, Brooke, and Zane Boerger, Justin (and Pam) Steffl, Sarah (and Jesse) Hedlund, Rachel (and Tony) Moldan, Heather and Shane (and Isa) Konakowitz; and sister, Alma Gerdes. Minnie was preceded in death by her parents; her husband, Herold; and brothers, Gustave and Robert Teichert The loves of Minnie’s life were her family and spending time with them. Other pastimes she enjoyed were fishing, crocheting, reading and socializing with friends. Minnie was a faithful member of St. Stephen Lutheran Church where she was a member of Womens Circle. She was also past president of the Blue Earth County American Legion Auxiliary. Blessed Be The Memory Of Minnie Emma Luckow.

The family of Minnie Emma Luckow created this Life Tributes page to make it easy to share your memories.

Send flowers to the Luckow family.