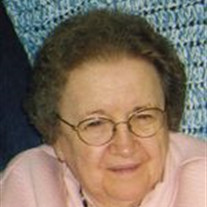 Marshall: Myrtle Paul, age 87, of Grand Meadow and formerly of Marshall, passed away on Friday, May 14, 2010 at St. Mary’s Hospital in Rochester. Funeral services will be held at First Lutheran Church in Marshall at 11 A.M. on Tuesday, May 18, 2010. Burial in the Marshall Cemetery will follow. Visitation will be held at the church one hour prior to the funeral service. Myrtle Anita was born on March 15, 1923 in Canby, Minnesota to Emil and Amelia (Fricka) Henrickson. She was baptized and confirmed in the Christian Faith. Myrtle was united in marriage to Lester Paul on April 14, 1941 at Taunton, Minnesota. Myrtle & Lester made their home in Marshall where they raised their children. Being a devoted servant of God, Myrtle enjoyed spending time with her family in the role of a wife, mother, mother-in-law, grandma, and great-grandma. Myrtle worked many years at the Marshall Hotel and although much of her life was spent in Marshall, she also resided in Pine Island, Spring Valley and Albert Lea. After her husband Lester’s death on July 16, 1973, Myrtle was employed in the bakery at Super Valu where she enjoyed working with her co-workers. At the end of her life she was living in Grand Meadow, Minnesota, surrounded by many family members and wonderful friends. Myrtle loved flowers, music, shopping and dining out, but her ultimate love was her family. Those who will truly miss and always remember her are Dale (and Sharon) of Phoenix, Arizona; Barb Paul of Spring Valley, Minnesota; Cheri (and Daniel) Broughten of Waseca, Minnesota; Roger (and Kristal) Henrickson of Rake, Iowa; Melissa (and Kevin) Belzer, Michelle(and Jay) Holland, Mary (and Nathan) Johnson, Terry (and Dar) Paul, Jr., Tim (and Crystal) Paul, Tory (and Cathy) Paul, Jason Broughten, Carly Broughten, Melissa Henrickson, Kristen (and Brent) Diderrich, Patricia Henrickson and Taylor Henrickson and her many great grandchildren, as well as her beloved sister Agnes Weigers and host of other loved relatives and friends. Among those who will welcome her at Heaven’s door are her beloved husband Lester; their son, Terry Paul; her mother and father, Amelia and Emil; her sister Margaret Peterson; her brothers, Delmar and Melvin; her mother-in-law, Ruby Paul and many others. We can only imagine she is now rocking her infant great-grandson Edward in her loving arms. Blessed by the Memory of Myrtle Paul.

Marshall: Myrtle Paul, age 87, of Grand Meadow and formerly of Marshall, passed away on Friday, May 14, 2010 at St. Mary&#8217;s Hospital in Rochester. Funeral services will be held at First Lutheran Church in Marshall at 11 A.M. on Tuesday,... View Obituary & Service Information

The family of Myrtle Paul created this Life Tributes page to make it easy to share your memories.

Marshall: Myrtle Paul, age 87, of Grand Meadow and formerly of...

Send flowers to the Paul family.