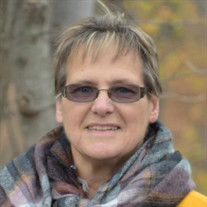 Nancy Walter, age 65, of Garvin and formerly of Russell, Minnesota, died on Monday, December 13, 2021, at the Sanford USD Medical Center in Sioux Falls, South Dakota. Memorial Services will be 11:00 a.m. Tuesday, December 21, 2021, at Christ Lutheran Church in Slayton, Minnesota. Following a reception at church, interment will be in the Russell Cemetery. Visitation will be held from 4:00 – 8:00 p.m. on Monday, December 20, 2021, at the Hamilton Funeral Home in Marshall, Minnesota. The evening will include a prayer service at 7:00 p.m. followed by a time to share memories. Visitation will continue one hour prior to the service on Tuesday, from 10:00 a.m. until the time of services at 11:00 a.m., at church in Slayton. Nancy Lucille Negaard was born October 13, 1956, in Canby Minnesota, to parents Clarence and Lucille (Wilking) Negaard. She grew up in Canby and attended school there, graduating with the high school class of 1975. Nancy went on to work at Trailways truck stop in Montevideo before moving briefly to Illinois where she worked in a factory. It was after her return to Marshall, Minnesota, that she met Mr. Steven Walter. Nancy was united in marriage to Steven on October 3, 1992, at Our Savior's Lutheran Church in Canby. The couple made their home in Russell, Minnesota, and had one daughter, Sara. In 2003 the couple moved to her current home in rural Garvin, on Lake Sarah. Steven and Nancy and spent over 25 years of marriage together prior to Steven's sudden passing in 2018. Nancy worked for the Schwan's Food Company for over 35 years. She had multiple roles within the company. She worked on the ice cream plant line before being promoted to the office where she served as secretary and ultimately a receptionist at the corporate office. Nancy was past president of the People's Association of Lake Sarah (PALS) and proudly volunteered at many deserving charities. Her enjoyments in life included fishing, camping, riding motorcycle, bowling, golfing, hunting prairie dogs, watching birds, and she always found time to spend with her granddaughter. When not otherwise occupied, Nancy found peace while relaxing on the lake. She died on Monday, December 13, 2021, at the Sanford USD Medical Center in Sioux Falls, South Dakota. She reached the age of 65 years and 2 months. Blessed be her memory. Nancy is survived by her daughter, Sara Walter (and Nathan Johnson) of Russell; granddaughter, Paisley Karsky; mother, Lucille Negaard of Canby; 5 siblings, Sharon (Howard) Zietlow of Montevideo, Linda Matthews of Buffalo, Jeff Negaard of Canby, Cindy Baldwin of Sioux Falls, SD, Dawn (Glen) Bernardy of Lucan; nieces, nephews, other relatives, and many friends. Nancy is preceded in death by her husband, Steven Walter; father, Clearance Negaard; an infant son and infant daughter.

The family of Nancy Lucille Walter created this Life Tributes page to make it easy to share your memories.

Nancy Walter, age 65, of Garvin and formerly of Russell, Minnesota,...

Send flowers to the Walter family.