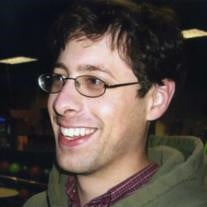 Nathan Peder Lasnetski, age 34, of Minneapolis, passed away peacefully on Sunday, August 2, 2015, at his home in Minneapolis. Memorial Services celebrating the life of Nathan are Friday, August 7, 2015, 11:00 AM at Cornerstone United Methodist Church in Marshall. Interment in the Marshall Cemetery will occur at a later date. Visitation will be held from 4:00 – 8:00 PM Thursday, August 6, 2015, at the Hamilton Funeral Home in Marshall. A prayer service is scheduled for 7:30 PM. Visitation will continue 1 hour prior to the service, from 10:00 – 11:00 AM, on Friday at the church. Clergy Officiating: Rev. Dave Johnston Organist: Loronda Schuler Special Music: Chris Tomlin ~ “Amazing Grace, My Chains Are Gone” (CD) Active Urn Bearers: Sarah and Andy Kompelien Honorary Urn Bearers: Ryan McCormick, Mark Burau II, Brent Karjala, James Zimansky, Ryan Chukuske, Joe Koska, Matt Silver, Josh Hanson Nathan Peder Lasnetski was born on February 9, 1981, in Marshall, Minnesota. He was the son of Nick and Linnea (Pederson) Lasnetski. Nathan was baptized as an infant by Rev. Passer and was later confirmed by Rev. Fair, both at Wesley United Methodist Church in Marshall, Minnesota. He grew up in Marshall and attended school, graduating with the Marshall High School class of 1999. Nathan went on to further his education at Southwest Minnesota State University. In 2001, Nathan moved to Minneapolis to work a variety of jobs. He most recently worked at Wuxi AppTec. Nathan was interested in science, astronomy, politics, and history. He was an avid Twins fan and really enjoyed music, playing in bands on the drums, guitar, and piano. He was very eco-conscious and liked to get out kayaking when he could. Visiting family was important to him, especially visits to his grandparents. He will be dearly missed. Nathan died on Sunday, August 2, 2015, in Minneapolis, Minnesota at the age of 34 years, 5 months and 24 days. Blessed be his memory. Nathan is survived by his parents, Nick and Linnea Lasnetski of Marshall; sister, Sarah (and Andrew) Kompelien of Flandreau, SD; grandpa, Myron Lasnetski of Canby; many friends; aunts, uncles, and cousins. He was preceded in death by his paternal grandma, Irene Lasnetski; maternal grandparents, Eugene “Buddy” and Norma Pederson; cousin, Steve Mills; and aunt, Colleen Przymus. The family invites attendees to the church basement for a luncheon following the service.

Nathan Peder Lasnetski, age 34, of Minneapolis, passed away peacefully on Sunday, August 2, 2015, at his home in Minneapolis. Memorial Services celebrating the life of Nathan are Friday, August 7, 2015, 11:00 AM at Cornerstone United Methodist... View Obituary & Service Information

The family of Nathan Peder Lasnetski created this Life Tributes page to make it easy to share your memories.

Send flowers to the Lasnetski family.