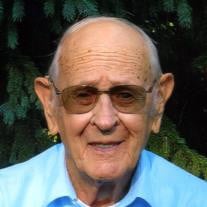 Nels LeRoy Bengtson, age 95, of Marshall, passed away Monday, January 19, 2015, at Avera Marshall Regional Medical Center. Funeral services are Saturday, January 24, 2015, 1:00 PM at Marshall Evangelical Free Church in Marshall. Following a luncheon, interment will be in the Skandia Cemetery, rural Balaton. Visitation will be from 4:00 – 8:00 PM Friday, January 23, 2015 at the Hamilton Funeral Home in Marshall with a prayer service scheduled for 7:00 PM. Visitation will continue one hour prior to the service, from Noon – 1:00 PM, on Saturday at the church. Clergy Officiating: Rev. Ben Bryant, Jim Miller, and Don LeClere Organist: Colleen Engel Congregational Hymn: “Thanks To God For My Redeemer” Special Music: Bev Anderson family ~ “Children Of The Heavenly Father” Derek Burns, solo ~ “’Til The Storm Passes By,” “Battle Hymn Of The Republic” Casket Bearers: Dan Anderson, Tom Hunsted, Marlin Nelson, Rick Hefti, Alan Macht, Arden Nelson Military Honors: Marshall American Legion, Post #113 Nels LeRoy Bengtson was born on September 28, 1919, in Skandia Township, Murray County, Minnesota. He was the son of Berndt and Lydia (Anderson) Bengtson. LeRoy was baptized as an infant at the Free Mission Church in Skandia Township. He grew up on the family farm and attended school in district #8. After the eighth grade, LeRoy helped on the farm and worked for neighbors. On June 24, 1942, LeRoy enlisted in the United States Army and was deployed overseas in September of 1943. He participated in 5 campaigns including the Normandy invasion and Battle of the Buldge. He was awarded several medals, including the Purple Heart after being wounded near St. Lo, France. Upon returning home, LeRoy met Ms. Betty Hefti. On September 26, 1948, LeRoy and Betty were united in marriage at her home. The couple farmed near Balaton for 31 years and were blessed with two sons, Douglas and Dwayne. In September of 1980, they moved into Marshall and continued their 66 years of marriage together. LeRoy was all Swede and loved his history; he could recall amazing detail from his time in the Service and events back to the Great Depression. He was a member of Agape Fellowship Church in Marshall, serving as an usher and greeter. He was a proud member of the Marshall VFW and DAV where he served as past-commander. LeRoy lived for his family and loved spending time with his grandchildren and great-grandchildren. He also knew many kids near his home and was known as the “neighborhood grandfather.” LeRoy’s other enjoyments in life included gardening, woodworking, bird watching, and his farm work. He was an avid Minnesota Twins fan and loved to watch Wheel of Fortune. Nels LeRoy Bengtson went to be with the Lord on Monday, January 19, 2015 at the age of 95 years, 3 months and 22 days. Blessed be his memory. LeRoy is survived by his wife, Betty Bengtson of Marshall; two sons, Douglas (and Sharla) Bengtson of Wood Lake, Dwayne Bengtson of Marshall; four grandchildren, Sheri (and Derek) Burns of Superior, WI, Sheila (and Josh) Wilson of Bloomington, Ben Bengtson of Marshall, Lexy Bengtson of Marshall; two joys of his great-grandchildren who called him “Old Papa,” Grace and Jonah Burns; two sisters-in-law, Dorothy Bengtson of St. Joseph, Lucy Hefti of Marshall; many nephews, nieces, other relatives and friends. LeRoy is preceded in death by his parents, Berndt and Lydia Bengtson; 4 brothers; 5 sisters; a niece and a nephew.

The family of Nels LeRoy Bengtson created this Life Tributes page to make it easy to share your memories.

Send flowers to the Bengtson family.